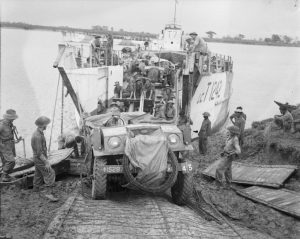 Kohima.03 May,2016. On my battle tracking I came across a worn-out yellow coloured pillar on the road from Dimapur to Kohima put by the Border Roads. It said , “World War II- After the Battle of Kohima the Advance to Imphal started here on 7th June 1944.” And this made me go down the realms of history to recall the role played by the brave soldiers of the British Indian Army in stopping the advance of the Japanese during the last great war.

During World War II, Operation Dracula was the name given to an airborne and amphibious attack on Rangoon by British, American and Indian forces, part of the Burma Campaign.

The plan was first proposed in mid-1944 when the Allied South East Asia Command was preparing to reoccupy Burma, but was dropped as the necessary landing craft and other resources were not available. In March 1945 however, it was resurrected, as it was vital to capture Rangoon before the start of the monsoon (which was expected in the second week of May) to secure the lines of communication of the Allied troops in Burma.

Before the order was given to reinstate Dracula, South East Asia command had been preparing to attack Phuket Island off the Kra Isthmus. (The operation was codenamed Operation Roger.) The naval and air elements for Dracula were therefore already in place. Indian XV Corps HQ, under Lieutenant General Sir Philip Christison, was to control the ground forces. 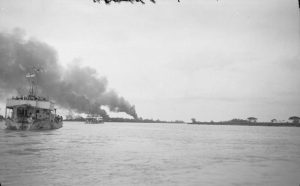 Although the British knew by 24 April from Ultra radio intelligence that Burma Area Army HQ had left Rangoon, they were not aware that the Japanese were about to abandon the city entirely. It was believed that the landings would meet strong resistance. Under the modified plan for Dracula, the Indian 26th Division under Major General Henry Chambers would establish beachheads on both banks of the Rangoon River. The British 2nd Division would follow up through these bridgeheads several days later to launch the main assault on the city.

The Indian 26th Division and other forces sailed in six convoys from Akyab and Ramree Island between 27 April and 30 April. The naval covering force consisted of 21 Carrier Squadron of four escort carriers, two cruisers and four destroyers, and the 3rd Battle Squadron, commanded by Vice Admiral Walker, consisting of two battleships (HMS Queen Elizabeth and the Free French battleship Richelieu), two escort carriers, four cruisers (one Dutch) and six destroyers. Another flotilla of five destroyers was responsible for the destruction of the main Japanese evacuation convoy. 224 Group of the Royal Air Force, under Air Vice Marshal the Earl of Bandon, covered the landings from the airfields around Toungoo and on Ramree Island.

A 25-pdr field gun being bought ashore from a landing craft at Elephant Point, 2 May 1945. Early on 1 May, eight squadrons of B-24 Liberator and four of B-25 Mitchells, and two squadrons of P-51 Mustangs from the 2nd Air Commando Group USAAF bombed and strafed known Japanese defences south of Rangoon.[23] An air force observation post, a small detachment from Force 136 and a 700-man strong Gurkha composite parachute battalion from the 50th Indian Parachute Brigade landed at Elephant Point at the mouth of the Rangoon River in the middle of the morning. They eliminated some small Japanese parties, either left as rearguards or perhaps forgotten in the confusion of the evacuation and several guns overlooking the sea approaches to Rangoon. They themselves suffered thirty casualties from inaccurate Allied bombing. 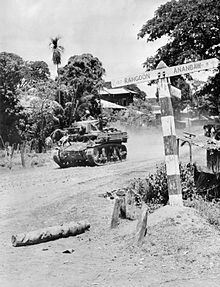 Once Elephant Point was secured, minesweepers cleared a passage up the river, and landing craft began coming ashore in the early hours of the morning of 2 May, almost the last day on which beach landings were possible before the heavy swell caused by the monsoon became too bad.

Meanwhile, an Allied Mosquito reconnaissance aircraft flying over Rangoon saw no sign of the Japanese in the city, and also noticed a message painted on the roof of the jail by released British prisoners of war. It read, Japs gone. Extract digit – Royal Air Force slang for “Get your finger out” or “Hurry up”. Boldly, the crew of the plane tried to land at Mingaladon Airfield, but damaged their tail wheel on the potholed runway preventing them taking off again. They walked to the jail, where they found 1,000 former prisoners of war who informed them of the Japanese evacuation. The air crew then went to the docks, where they commandeered a sampan and sailed it down the river to meet the landing craft.

During April 1945, units of the British Fourteenth Army advanced to within 40 miles (64 km) of Rangoon, but were delayed until 1 May by an improvised Japanese force which held Pegu. On the same day, as part of Operation Dracula, a composite Gurkha parachute battalion landed on Elephant Point at the mouth of the Rangoon River. Once they had secured the coastal batteries, minesweepers cleared the river of mines. On 2 May, the Indian 26th Division began landing on both banks of the river. The monsoon also broke on this day, earlier than had been expected.

The troops of the Indian 26th Division began occupying the city without opposition on 2 May. The British were joyfully welcomed, perhaps not universally as liberators, but certainly as they could restore order and bring in food and other assistance. When the Japanese and Ba Maw’s officials left Rangoon, widespread looting and lawlessness had broken out and continued for several days. The retreating Japanese had burned down the jail housing Burmese prisoners. They had also destroyed St. Philomena’s Convent, which had been used as a hospital, killing 400 of their own men.[26] After three years of war and deprivation, the city was deep in filth, many of the population had fled to escape the Kempeitai (Japanese military police) and those remaining were in rags. Dacoits (armed bandits) plagued the outskirts and various infectious diseases were rife. 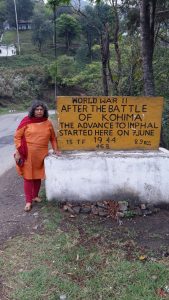 Units of the 26th Division moved out along the main roads to link up with Fourteenth Army. On 6 May, they met the leading troops of 17th Division, pushing their way through floods southwards from Pegu, at Hlegu 28 miles (45 km) north east of Rangoon. Fourteenth Army and the other Allied forces in Burma had a secure line of communication.

The 2nd Air Commando Group’s C-47s, which had transported the parachute battalion, returned to Kalaikunda and then moved to Comilla.

Matsui’s Kani Force joined the remnants of the Japanese Twenty-Eighth Army in the Pegu Yomas. During July, these forces tried to break out eastwards to join the other Japanese armies east of the Sittang. Matsui’s men suffered slightly lighter casualties in this costly operation than most of the other Japanese units involved. However, the naval personnel in Matsui’s force broke out separately from the main body and several days later, which allowed Allied units to concentrate against them. They were effectively wiped out, only a handful surviving.