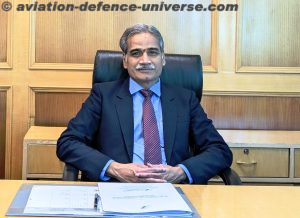 Bengaluru. 12 January 2023.  Damodar Bhattad S has taken charge as the Director (Finance) of Navratna Defence PSU Bharat Electronics Limited (BEL) with effect from January 11, 2023. He was working as General Manager (Finance) at BEL’s Corporate Office prior to his elevation.

He is a Chartered Accountant, who had secured All India Rank in ICAI final examination. A B.Com Graduate from the University of Madras, he joined BEL as Accounts Officer at its Chennai Unit in 1988 and in a career spanning over 34 years, served the company in various roles and capacities.

As Head of Finance at BEL Corporate Office, he played a significant role in the formulation of various company policies and procedures. He also played a pivotal role in BEL recording its highest ever turnover of Rs. 15,044 Cr in FY22 and achieving an order book of more than Rs. 50,000 Cr. As Head of Funds, he efficiently managed Working Capital and ensured BEL remained debt free. He and his team played a key role in efficient collection of Trade Receivables, in the last two years (FY 2021 and 2022). He also initiated investment of surplus funds in Mutual Funds, which increased the company’s returns from Treasury Management Damodar Bhattad has ensured that adequate internal financial controls are put in place in BEL and the company’s Risk Control Matrix is current and updated. He has been a member of various Management Committees — Management Audit Committee, Corporate Risk Management Committee, CSR Screening Committee and Invitee of Audit Committee and Capital Investment Committee to name a few, and has been able to provide valuable insights to BEL Management from the Finance perspective.

Damodar Bhattad was Lead Member (Finance) for devising a business-cum-growth plan for BEL with respect to a strategic advisory services contract signed by the Defence major with a leading consultancy firm. He has been an integral part of the BEL Management team at various analysts/investor conferences. He has played a major role in BEL making the leap from conventional financial reporting to the more holistic approach of bringing out its first Integrated Annual Report in 2021-22. He believes and supports initiatives which increase BEL’s value for shareholders, in terms of higher Dividend payout and capitalisation of reserves.

As a member and Finance representative of BEL’s Pension Trust and Gratuity Trust, Damodar Bhattad has ensured that the trust portfolio is suitably diversified in order to minimise risk and maximise returns. Earlier, during his tenure as Head of Finance (Operations), he played a crucial role in finalising contracts and selling price of major equipment and systems with customers. As a member of BEL’s Price Negotiation Committee, he was instrumental in obtaining significant price reductions from suppliers. He believes that BEL being a socially responsible corporate citizen must maximise its value for all its stakeholders.