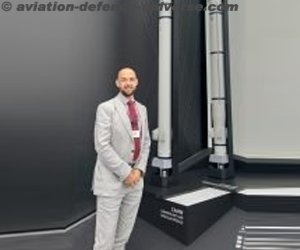 Farnborough, UK. 21 July 2022. Despite being an airshow , the MBDA chalet at Farnborough international Airshow 2022 had a huge model of the CAMM (Common Anti-air Modular Missile) which is a part of the Sea  Ceptor Air Defence System, and was the cynosure of all eyes. It has a wide target set including the capability to engage small naval vessels, which would give the missile a limited surface-to-surface role. In service with the Royal Navy since May 2018, Sea Ceptor provides a powerful shield against airborne threats, including anti-ship cruise missiles, hostile combat jets, and helicopters.

Andrew Blackburn Technical Advisor for Maritime Systems MBDA while speaking exclusively with Aviation & Defence Universe (ADU) at Farnborough Airshow 2022 stated, “ It’s all about performance and costs. At the end of the day, through roughly a billion pounds worth of UK investment, we’ve created the CAMM and the Sea Ceptor system to be the highest performing short range surface-to-air system against the full range of threats that our Navy, the Royal Navy and our export customer Navies can expect to face. That comes at a huge cost to develop the know how and the capabilities and systems to do that. We don’t offer cheap products. It’s still about cost effectiveness, but more importantly it’s about performance, and at the end of the day, to protect our ships and our sailors against those threats.”

Sea Ceptor protects both the host ship and high value units in the local area. The weapon system has the capability to intercept and thereby neutralise the full range of current and future threats including combat aircraft and the new generation of supersonic anti-ship missiles. Capable of multiple channels of fire, the system will also counter saturation attacks. 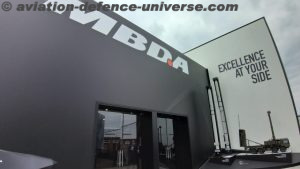 He added, “here we are at Farnborough International Air Show. I’m standing beside our maritime products, and in particular Sea Ceptor, which we are offering and very proud to offer for the Indian Navy’s short range surface to air missile system (SRSAM) requirement to equip the Indian Navy’s Kamorta class Corvettes. Sea Ceptor is going from strength to strength. We now have four export customers on contract. Recently  has been announced the selection of Sea Ceptor for the Polish Miecznik (“Swordfish”) class frigates, and we hope that very soon there will be a decision for the SRSAM as well.”

Sea Ceptor can be easily retrofitted into a wide range of platforms, ranging from 50 m OPVs to frigates and destroyers. Two main features provide this flexibility. Firstly, the use of ‘soft-launch’ technology for a compact vertical launch system that can easily be installed in a number of locations. Sea Ceptor can be targeted from the ship’s existing surveillance radar and therefore does not require dedicated fire control radars.

He said , “so Farnborough is principally an airshow, but we do have a small maritime section. Here on the stand we have a small model of the CAMM missile being fired from a Mk41 launcher. And outside our booth we have a full scale model of the CAMM missile and a range of digital media which we can show to customers to explain the capabilities of our products. Sea Ceptor and CAMM are amongst our newest and we would say probably the most capable short range surface fire missile system available on the market today, thanks to a number of key features. It’s fully active radar seeker, it’s two way radio data link, a very effective warhead, and soft vertical launch, which is really quite innovative – you won’t see it on any other missiles in its class, which gives it exceptional short range performance, as well as capability to defend against all naval air targets out to around about 25km”.

Sea Ceptor can be configured to either provide the full functionality to operate as an independent air defence capability or to operate as an integrated layer within a higher command & control architecture hosted on the ship’s Combat Management System. 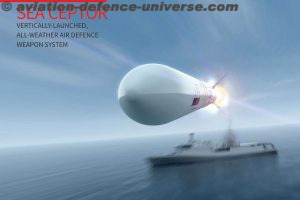 Andrew informed, “So we’ve been very successful selling the product internationally. Brazil, New Zealand, Canada and Chile. And of course, I just mentioned Poland with a lot of interest, really across the globe. So it is a truly global product. Sea Ceptor is a home grown UK products. We’re also collaborating with MBDA Italy and the Italian MOD to develop a longer range version – CAMM-ER – which we also have on the stand here today. We’re also very happy to talk about how we can evolve the product with customers. And we are doing transfer of technology in some areas. Although the SRSAM competition for India is not necessarily a Make-in-India project. We know about the India’s aspiration to develop more indigenous products, and we’re ready to see how we can take our product and evolve it in India as well, increasing the range or whatever requirements are coming out of the Indian MoD, we might need to be able to optimize the product to suit those requirements.”

“We have been working alongside L&T for many years now. Our offer is through Larsen & Toubro and through them and their capabilities, and also their partner organizations who have the ability to manufacture in India. So we’re looking at where we can embed manufacturing and development in India and we’re very much letting L&T lead us on that. MBDA has a very long history working in India. We’ve been working with Indian companies and partnering with the Indian Armed Forces for well over 50 years. Over the years, we’ve seen more than 500 missiles, MBDA designed missiles manufactured in India by Indian Companies. So I think it’s a market that we understand, and we look forward to going through our further relationships with the joint venture and our other relationships with Indian industry. There are two recent agreements been signed with BDL. The first one was signed about 18 months ago, and that was for the final assembly integration testing of the ASRAAM  missile, which was selected by the Indian Air Force for the next generation first combat missile program on Jaguar. So that was an agreement for final assembly integration testing by BDL. And during Eurosatory we signed a further final assembly integration and test agreement with BDL for the Mistral missile that is a short range defence missile which is through the ATAM system that’s currently integrated on India’s LCH helicopter. That agreement would also allow for BDL to conduct final integration test of this role in India, ” Andrew concluded.

L&T MBDA Missile Systems Limited is an amalgamation of  expertise of two global brands who have made names for themselves individually , together are positioned to offer India the very best technology through the IDDM, ‘Buy (Indian)’ or the ‘Buy and Make (Indian)’ channels and become a means of acquiring and mastering the very latest and most advanced guided weapon systems technology currently available anywhere in the world. 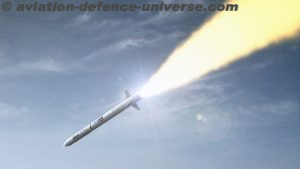 CAMM has already been delivered to both the British Army and the Royal Navy, where it is the interceptor in both ground-based air defence (GBAD) and naval-based air defence (NBAD) systems, enabling these services to equip missiles from a shared stockpile. Indian armed forces have a platter to choose from for themselves but this interoperability could be an unparallel asset in times of need. And coming from the man who set up and directed the first Aviation Engineering and Weapons Department of the 65,000 tonne Queen Elizabeth class aircraft carrier, developed and implemented a £2M research programme with industry to inform the Navy’s Future Anti-Surface Guided Weapon programme, including warhead assessments, aerodynamics, aircraft integration, target tracking and human-in-the-loop workload trials in his career with the Royal Navy, it could be a food for thought for the the Indian Navy.