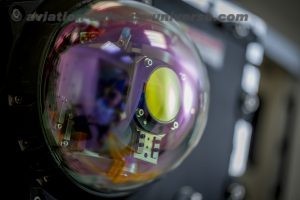 Farnborough, 17 July 2018. Leonardo has announced , at Farnborough International Airshow 2018, that it has secured a customer in the Middle East region for its ‘Miysis’ Directed InfraRed CounterMeasure system. The product will be provided to the end user to protect aircraft from advanced heat-seeking missiles. Over the last few years, the global demand for DIRCM systems has dramatically increased as an aircraft’s standard countermeasures, such as decoy flares, are no longer able to defeat the latest generation of infrared guided missiles. The Miysis DIRCM can defeat these threats. It works by accurately locating and tracking an inbound missile and then shining a high-powered laser onto the missile’s targeting sensors, confusing the missile and directing it away from the aircraft. Because of the high-level of engineering expertise required to create such technology, DIRCM systems are only available from a handful of providers. Leonardo is part of this elite group, with three decades of experience in designing and manufacturing DIRCM technology. The Miysis system contains the latest DIRCM technology and is designed and manufactured by Leonardo in the UK, meaning that it is readily exportable around the world. Miysis has already been selected by the Canadian Department of National Defence (DND), through its contract with General Dynamics Mission Systems–Canada, for installation on the Royal Canadian Air Force’s (RCAF’s) CP-140 ISR/ASW aircraft as part of a defensive aids subsystem. Deliveries of Miysis to the Royal Canadian Air Force are already underway. Miysis is class-leading: smaller, lighter and drawing less power than other DIRCM systems on the market. It offers the full spherical coverage required to counter advanced threats. The system’s modular, open-architecture design also allows for integration with a customer’s in-service missile approach warners and other defensive aids systems. Miysis has proven its ability to defeat infrared-guided missiles in a number of demanding NATO-led infrared countermeasure trials.