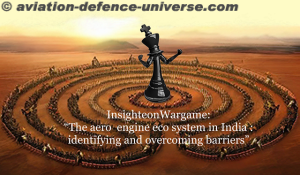 Insighteon Consulting ran an interactive war-game from 23 to 25 August 2022, with the aim of  ascertaining a roadmap for the development of an aero engine eco system in India.

The key takeaways from the war-game are listed below.