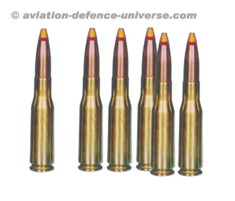 New Delhi. 21 December 2017. Eight in service ammunition can be made by the indigenous industry. A step forward in the direction of ‘Make in India’ in Defence sector and to facilitate development of indigenous capacity, reduce import dependence and with the long-term objective of building capacity within the industry as a robust alternative source of ammunition, the Government has approved manufacturing of these selected ammunition for Indian Army by Indian Industry.

Defence Minister of India Nirmala Sitharaman has approved a long term contract of 10 years with the selected ammunition manufacturer, to facilitate a viable commercial model, will be entered into. Individual Indian companies, as per Indian Companies Act 2013, with foreign equity not exceeding 49%, owned and controlled by resident Indian citizens; Consortium consisting of only Indian companies and wholly owned subsidiary Company, are eligible to participate.

The selection of manufacturer will be through an Open Tender Enquiry under two bid system. Companies are allowed to bid for any number of ammunition types. However, a company will be awarded not more than three contracts.