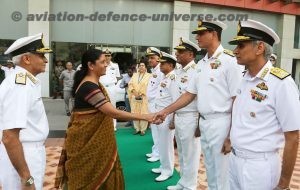 At the very outset, the  Raksha Mantri complimented all personnel of the Indian Navy for securing the maritime interests of the nation. Taking note of the recent developments in our maritime neighbourhood, she emphasised the need for the Indian Navy to be strong at sea, and be ever ready and vigilant to counter any challenges in the maritime domain.

The  Raksha Mantri acknowledged the high operational tempo maintained by the Navy in the last one year through regular deployment of ships, submarines and aircraft from the South China Sea and Sea of Japan in the East to the Persian Gulf and the Atlantic Ocean in the West and the shores of Australia in the South including the focused efforts to deter piracy attempts off the Gulf of Aden. Participation in a number of bilateral exercises and the unprecedented success of the Exercise MALABAR with the US and the Japanese Navy earlier this year were lauded by the Raksha Mantri. 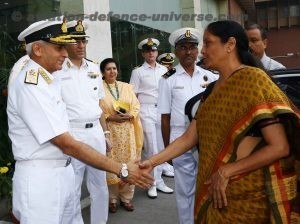 Recognising the lead taken by Indian Navy in indigenisation and self-reliance, the  Raksha Mantri stated that it is the collective responsibility of Service Headquarters, the Ministry and the Industry to promote a more vibrant ecosystem percolating down to the MSMEs, to encourage development of equipment and systems in India and to reduce import dependence in the Defence sector.

She took note of the critical capability shortfalls that the Navy is facing in ship-borne multi-role helicopters, conventional submarines and mine counter measure vessels, which need urgent redressal to maintain the combat edge of the Navy. The  Raksha Mantri assured the Commanders’ that that these issues were being given due impetus and efforts were in hand to mitigate these shortcomings at the earliest. 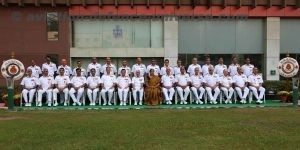 The  Raksha Mantri also commended the efforts of the Navy to constructively engage with the Indian Ocean Region (IOR) littorals to build their capacities and enhance their capabilities. She also mentioned the initiatives taken by the Indian Navy to impart practical training for naval personnel from IOR littoral nations on a regular basis. Institutionalising a full-fledged regional-forum to help find collective solutions to matters maritime in the IOR and facilitate projection of India’s and Indian Navy’s strategic and operational vision to a wider regional and global audience through the ‘Goa Maritime Conclave’ to be held early next month was also praised by the  Minister. She further stated that MILAN 2018 at Port Blair early next year would be an excellent forum to get the littoral Navies on a common platform to discuss regional maritime issues and security challenges.

Concluding her address the  Raksha Mantri stated that maritime interests of a nation have a vital relationship with its economic growth and these shall be protected at all costs by ensuring a strong and credible Indian Navy.

The four-day long Naval Commanders’ Conference is in its third day of deliberations wherein the top-level leadership of Navy is reviewing major operational, training and administrative activities undertaken in the last six months. The conference also reviewed IN’s readiness to deploy over the entire range of missions in the maritime domain (the new Mission-based Deployment Concept).