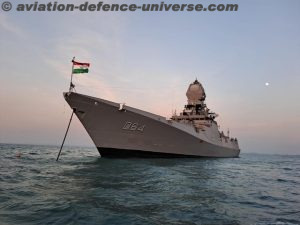 IFR-22 is being conducted by BN this year, to commemorate the Birth Centenary of the Father of the Nation, Bangabandhu Sheikh Mujibur Rahman and to celebrate the Golden Jubilee of the Independence of Bangladesh. The Chief Guest for the Fleet Review scheduled was the Prime Minister of Bangladesh, Sheikh Hasina. 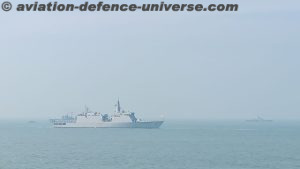 The visiting Indian Navy ships Kochi, Kavaratti and Sumedha are the latest indigenously designed and developed guided missile stealth Destroyer, anti-submarine Corvette and Off- shore Patrol Vessel respectively. INS Kochi is a part of the Indian Navy’s Western Fleet based at Mumbai, whilst INS Kavaratti and INS Sumedha form part of the Eastern Fleet based at Visakhapatnam.

All three ships are equipped with a versatile array of weapons and sensors, carry multi-role
helicopters and symbolise India’s warship building capabilities, keeping in line with the
vision of ‘Atmanirbhar Bharat’.