HAL receives RFP from IAF for 83 LCA-Tejas Mk 1A. 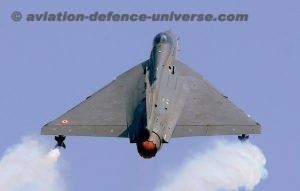 New Delhi. 22 December 2017. Precisely a year and a month ago on 7 November 2016, the then Defence Minister of India Manohar Parrikar approved procurement of 83 Tejas for the IAF, at a cost of ₹50,025 crore (US$8 billion) and Hindustan Aeronautics Ltd. (HAL) received a RFP from the Indian Air Force (IAF) for the same. This single engine fighter might just be giving Make-in-India aspirants Lockheed Martin and SAAB a backseat, despite IAF’s dire need to fill the wide gap between its requirement and existing inventory.

This put to rest to all rumours which floated recently that the Indian Air Force had told the government that the Tejas is inadequate for the single-engined fighter program with insufficient flight endurance, smaller payload capacity, increased maintenance hours, and higher costs for maintenance compared to other contender aircraft. It may be recalled that HAL’s chief rejected the criticisms and called the Tejas a world class fighter jet that can fill its defined role. He also mentioned that minimum life span of Tejas is 30 years which can be extended. HAL CMD T Suvarna Raju also stated that HAL delivered five Tejas as of 19 November 2017, which have made more than 600 flights.

In June 2017, HAL stated that it expects to have delivered 123 Tejas aircraft to the Indian Air Force by 2024–25. HAL outlined a three–pronged approach to accelerate aircraft production. It will build an additional assembly line, reuse the Hawk assembly line, and outsource major components to the private sector.

In addition to the LCA mK1 the additions in Tejas MK I-A are the AESA Radar co-developed with Israel’s ELTA corp, a reduced weight by 1000 kg from its initial weight of 6500 kg, made maintenance friendly by re-configuring some of its LRUs and proper distribution of the dead weight in the aircraft, adding an In-flight refueling capability and an integrated electro-optic Electronic Warfare (EW) sensor. The Mk.1A package will contain ground handling aids and testers to enable speedier turnaround of aircraft.

Each LCA-Tejas MK1A will cost $ 40 million per unit.