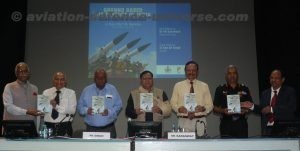 • An insight into the book launched
New Delhi. 02 October 2018. A book titled Ground Based Air Defence in India : Challenges and Opportunities was launched by Dr V K Saraswat, former DG DRDO and SA to Minister of Defence, presently Member Niti Ayog at an event conducted by USI.

The book has been authored by Lt Gen (Dr) V K Saxena, former DG Army Air Defence and presently Distinguished Fellow VIF and Fellow USI. This is the author’s fifth book. His earlier works include; 1. Ground Based Air defence: Contemporary Issues; 2. Amazing Growth Journey of UAVs and Ballistic Missile Defence Capabilities; 3. Future of United Nations in the 21st Century; and 4.United Nations and Human Rights – Past Performance and Future Challenges.

The strength of the book lies in the fact that besides the main author, it also contains a viewpoint of several other scholars in the field of air defence, air power and aerospace. The soul of the book is anchored in the trio of questions- what threats we face?; what is required to counter them?; and what is the way ahead?

Accordingly the ab-initio place in the chapterisation sequence has been deservedly given to a comprehensive analysis of the air threat. 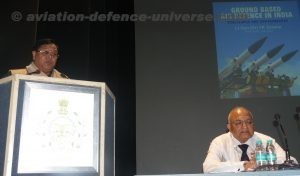 In fact, this analysis becomes the prime driver since the raison-de-etre for existence of all air defence resources on land sea and in the air is to defeat the air threat from our potential adversaries.

This chapter explains how the severity and the lethality of the air threat at one end is tied up in an eternal cause-effect cycle with the air defence means on the other in the spirit, “to every sword a shield”. The chapter goes on to present a qualitative, as well as, a quantitative analysis of the s air threat from our potential adversaries in specific terms. This in a way sets a framework of challenge that needs to be effectively overcome by the air defence warriors.

The book moves further to trace the chronology of the evolution of the air defence concepts of employment right from the pre-world war days of “balloon busters” to the WWI days of the emergence of dog fight , graduating to the concepts of air wars in WWII , thereafter to the battle of Britain that laid the foundations of the air defence battle management command and control (BMC2) architecture. Against this backdrop, the current employment concepts and practices and the rationale for the same has been explained. 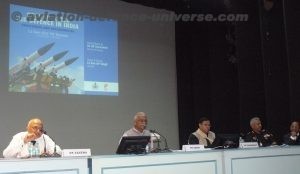 Against the above backdrop, the book opens the challenge Air Defence Control And Reporting System ( ADC&RS) and explains how such a system is the lifeline of the air defence battle. Explaining the relevant details of the existing status of AD BMC2, as well as, AD C&R system, the book highlights the immediate operational need to address the critical voids that exist in this domain.

Next the book explains the challenges of Air Space Control (ASC) in providing maximum freedom of action to the multifarious users of air space with minimum restrictions and always keeping the “cardinal sin” of fratricide at bay. How the finite resource of air space has become congested and contested has been explained. Also the emerging challenge of insertion of the Unmanned Aerial Systems (UAS) in the national air space has been explained in length. Turning to technology , it has been explained how the emerging technologies of AI and extended AI will bring a paradigm change in the ASC domain has been covered. 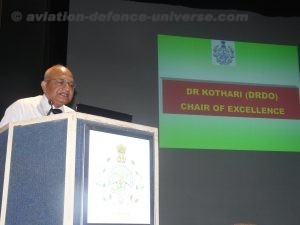 The book thereafter opens up the unmanned revolution, explaining how the UAS are becoming a great asset for the attackers but are posing grave challenge to the defenders who are charged with the onerous responsibility of bringing them down. Further, the concept of Manned and Unmanned Teaming of combining the human virtues of the combat pilot with the sheer machine capability of the unmanned producing multiplicative effects has been covered. Lastly, the emerging concept of SWARM UAVs and other latest developments in this field have been explained.

The book thereafter dwells on the ballistic missile threat to our country and how to counter this threat, a viable Ballistic Missile Defence (BMD) system was conceived way back in 2000-2001 has been highlighted. The current status of this system, the multiple imperatives to make it a “deliverable capability” and the need for its integration with the futuristic inductions of systems like the S 400 and NASAMs II has been explained.
The book warns that cutting-edge stealth threat has already arrived at our borders thanks to the maturing of the modern combat platforms like J 20 and J 31 with our northern neighbour and their likely proxy on our western border. A way ahead to deal with the stealth threat in acquiring the capability of detection and low-cost kill has been suggested. 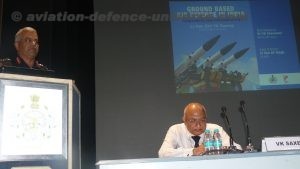 Hereafter the book turns the here and now and highlights the challenges in keeping alive various weapon and support systems that are 40-60 year old. The special problem of missile shelf-life has been explained. Also a suggested way ahead to address the challenge of vintage has been presented.

The next Chapter explains the world of simulators and their very special reference in the GBAD domain where the systems are low in quantum , very high in costs with limited operational hours. Against this backdrop, a complete hierarchy of basic and advanced simulators have been explained. Also, a word on the state-of-the-art simulators riding on the enabling wings of technologies like AI, extended AI and GPS etc have been covered.

In the end, the book presents the fruit of labour by way of presenting a view point on the future air defence needs. In this, the requirement of timely and regular assessment of air threat by experts and the need for a time-to-time identification of vulnerabilities has been stated in generic terms. Thereafter, going along the three verticals of sensors, shooters and BVMC2 systems a view point on the futuristic needs in each vertical has been stated with rationale. In addition, the need to build the BMD capability and the need to deal with the stealth threat and the UAS threat has been suggested. 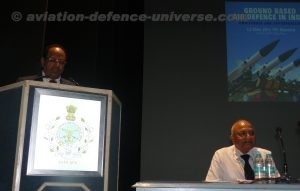 The book in its inclusive coverage provides referenced and researched material in the GBAD domain that will be found immensely usable by various subject matter experts as well as general readers. It will also help the Army AD directorate in their day-to-day dealing with professional matters.