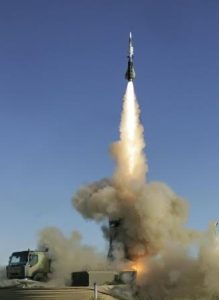 Paris. 14 June 2016. Italian Minister of Defence, Roberta Pinotti, and French Minister of Defence, Jean-Yves Le Drian, signed a ‘Cooperation Arrangement’ agreement which aims to pursue the joint development of the Aster 30 Block 1 NT missile. With this agreement, Italy is joining with France who launched the development programme in December 2015.

The Aster 30 Block 1 NT programme comprises, in addition to the upgrade of the Aster missile, the modernization of the SAMP/T systems currently in service with the French Air Force and the Italian Army. These systems as a result will see themselves featuring enhanced capabilities notably against ballistic missiles and thereby making  essential contributions to the NATO programme in this domain.

Commenting on this event, Antoine Bouvier, CEO of MBDA, declared :  ”Today marks a very important date for European defence cooperation and for MBDA in particular. The Aster missile programme is Europe’s most ambitious tactical missile programme. The two countries, which have carried out this programme for many years, have just laid out a robust route map that will see the Aster programme well into the next decade, which will help to sustain industrial know how for many years to come and which is key to ensuring French and Italian sovereignty. Aster is in fact much more than a missile. It is a whole family of air defence and anti-missile systems which has been adopted by 11 armed forces around the world. Aster represents the leading edge of worldwide military capability and as such serves to consolidate the European missile industry.”.