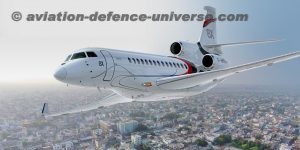 Saint-Cloud, France. 07 March 2018. Dassault Aviation will showcase the ultra long range Falcon 8X at this year’s edition of Wings India, India’s biggest civilian aviation exhibition. It will be the first appearance of the 6,450 nm/11,945 km trijet at this prestigious event, which opens on March 8 at Hyderabad Begumpet Airport.

The inaugural Falcon 8X presentation comes just as Dassault is introducing into the market a new ultra widebody twinjet, the Falcon 6X. Unveiled on February 28, the 6X will be the most modern, spacious and versatile twin in the 5,000 nm segment and will draw on many of the advanced features of the 8X, in particular its ultra quiet cabin.

The first Falcon 8X was handed over to an Indian customer early last year and is now in operating in all major markets, including the U.S., Europe, the Middle East, Brazil and China as well as India.
With 26 Falcon aircraft currently in service, Dassault is the large cabin market leader in India, where the company has long enjoyed a strong brand image, in part thanks to the Indian Air Force’s long reliance on Dassault combat aircraft. A relationship that dates all the way back to 1953 and has continued without interruption ever since, culminating in 2016 with the IAF’s acquisition of a batch of 36 frontline Rafale fighters.

The relationship received a further boost last October when a joint-venture created by Dassault Aviation and Reliance Aerospace Limited broke ground on a new production plant in Nagpur, Maharashtra. To be ready by the end of 2018, the facility will manufacture parts and component subassemblies for the in-production Falcon line and then move on to assemble Falcon as well as Rafale fighters.

All Falcons, and in particular late generation models like the Falcon 8X, 7X and 6X, draw on Dassault’s extensive experience with combat aircraft – a heritage unique among business jet manufacturers. Falcons also benefit from the advances in fighter aerodynamics, structural design, digital flight control and man-machine interface, keeping them on the cutting edge of executive aircraft technology.

“The unmatched ability of Falcons to combine short and long haul flights and fly out of short hard-to-reach airstrips with full range performance – even at high altitudes and extreme temperature conditions – make them perfect for Indian operating conditions,” said Dassault Aviation Chairman/CEO Eric Trappier. “No other business jet line is more suited to local requirements.” 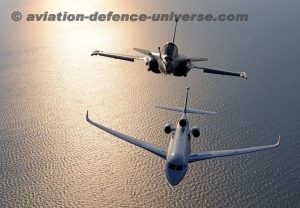 The majority of new Indian Falcon orders are for longer range models like the Falcon 8X and the very long range Falcon 7X. The Falcon 8X has benefited from a remarkably smooth market introduction, thanks largely to the high level of maturity of its onboard systems. Operational capability has been further reinforced with recent approvals to fly in severe crosswind conditions and to operate at London City Airport, one of the world’s most restrictive airports.

The Falcon 8X features the quietest and most comfortable cabin in business aviation. It offers an industry leading digital flight control suite and is available with a wide range of state of the art options, including high speed Ka-band connectivity and its revolutionary FalconEye Combined Visual System. The first head up display in the industry to meld synthetic and enhanced vision capabilities, FalconEye ensures superior situational awareness in all conditions of operation, day and night, FalconEye and will ultimately make it possible to reduce minima in low visibility landing conditions, providing a substantial operational benefit as well.

Dassault also anticipates strong demand among Indian customers for the Falcon 6X. Due to enter service in 2022, the 5,500 nm/10,186 km 6X will feature a cabin six feet, six inches (1.98 m) high and 8 feet 6 inches (2.58 m) wide — the highest and widest cross section in a purpose built business jet. It will be equipped with the most advanced cockpit and cabin systems available, including industry leading new generation digital flight control and cabin noise reduction systems derived from those on the Falcon 8X and the 7X. And like the 8X and 7X, the 6X will fly non-stop to London City from anywhere in the Indian Subcontinent. 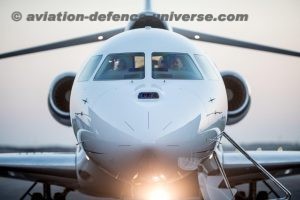 Currently, Dassault’s popular Falcon 2000 widebody twinjet still accounts for the largest part of the present Indian fleet. More than 600 of these ultra versatile and dependable twins have been delivered worldwide to date.

Sales are currently being driven by the Falcon 2000LXS, which offers a short-field capability comparable to smaller midsize and super midsize business jet models but with a range and comfort level far better than these aircraft. The newest edition to the 2000 line, the 4,000 nm/7,410 km 2000LXS can fly non stop from Mumbai to Beijing or Rome and offers a combination of airport performance, cabin design and efficiency unique in its class. It comes equipped with a second-generation EASy II full digital flight deck and like the Falcon 8X is available with the FalconEye Combined Vision System.

Indian demand is currently dominated by second hand sales. Two pre-owned Falcon 2000s were recently handed over to customers in the region, including one delivered on Febuary 9. to Club One Air—the fourth 2000 to be operated by that operator.

Dassault continues to reinforce its regional support presence. This year, the company is adding Mumbai to its list of Falcon regional maintenance and operation seminars, which allow customers to meet face to face with company and supplier representatives, exchange ideas on aircraft and service issues and obtain in-depth information on new Falcon products and services. The seminar will take place on March 6, on the eve of the Wings India event. Dassault also has Authorized Service Center agreements in India involving Taj Air, for the Falcon 2000 series, and Air Works India, for the Falcon 900EX/LX line. Both of these operations are located in Mumbai and supported by satellite facilities around the country. The regional fleet is also backed up by a spares warehouse in Mumbai and offshore facilities in Dubai, Kuala Lumpur, Singapore and Paris-Le Bourget.