F-35 generations ahead of the fourth generation fighters 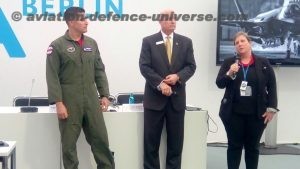 By Sangeeta Saxena
Berlin. 26 April 2018. F-35 makes you feel lethal and as if you own the battle field feels the pilot Capt. Andrew Dojo Olsop of the US Air Force, who flew the fifthe generation fighter from Phoenix Arizona in USA to Berlin in Germany, for the ILA. 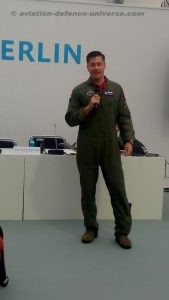 11.24 hours to the destination with refuelling done ten times in the journey from Phoenix via Minnesota, North Canada, UK and finally German airspace to Berlin.It is really easy and real fun with a great auto pilot system, excitedly explained Dojo.

The jet knows where to look, it does all the work and helps me take desicions, being pretty intuitive to the operator and is fun to fly, he added.