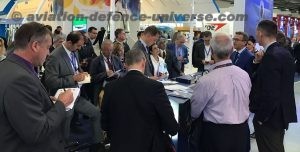 Farnborough .18 July 2018. Elettronica Group and Indra, in the context of the Farnborough Airshow,  have presented their collaboration in the development of a next generation Quantum Cascade Laser (QCL) based Direct Infrared Countermeasure (DIRCM) system suitable to protect rotary and fixed wing aircrafts.

Elettronica and Indra decision has been based on the high level of the respective know-how technological capabilities synergy with the goal to build up an innovative DIRCM system, with proprietary technologies from several EU countries, to deliver a truly European self-protection solution fully ITAR-free to facilitate international commercialization. The system, the first to be fully developed in Europe and one of the most advanced in the market, has been dubbed EuroDIRQM, to reflect its European roots and its application of QCL technology for DIRCM purposes.

The two companies have already completed the development of a first EuroDIRQM prototype system, with QCL operational ground tests successfully performed in March, with the kind cooperation of the Italian Air Force.

The EuroDIRQM is conceived as “all-in-one” equipment usable for multi-platform and multi-mission that will provide self-protection capabilities to all kind of aircrafts, from helicopters to transport/tanker to jet aircraft.

Quantum cascade is the latest development in laser technology, and represents a step forward from conventional semiconductor lasers. QCL energy is generated directly in the band of interest, optimizing power consumption at the same time as output beam.  This is a cutting-edge technology that is currently being introduced for next-gen systems in all fields. 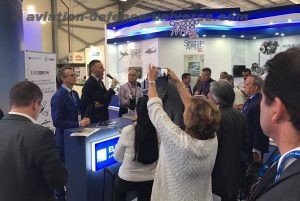 The EuroDIRQM solution will bring together about 30 years of combined experience in the DIRCM field by the two companies and the collaboration will benefit from their long term cooperation in other international successful programs.

During previous programs, Indra and Elettronica have successfully applied their DIRCM capabilities to different platforms and scenarios. The new QCL technology will expand Indra DIRCM capabilities, already consolidated with the InShield DIRCM system, contracted by OCCAR for the A400M ES fleet and operationally demonstrated in a CH47 Chinook in 2017. In the same way, Elettronica DIRCM portfolio, with the ELT/572 DIRCM, contracted by Italian Air Force and operative on-board of its C-130J aircraft, AW101 helicopters in Combat Search And Rescue configuration as well as operationally demonstrated in a C27J in 2016, will also be enlarged with this QCL based solution.

DIRCM systems are self-protection airborne solutions to protect aircrafts from the impact of heat-seeking missiles, and are specially required for protection against MANPADS missile attacks. The operative concept is based on the detection of the incoming threat during the missile launch and the countermeasure of the missile guidance using a directed laser beam that deviates the trajectory of the missile. All the process is quick and automatic, and the system can react against attacks of any IR seeker with a jamming sequence that ensures successful countermeasure.

MANPADS (Man Portable Air Defence Systems) are surface to air missiles, guided towards the heat generated by the aircraft, and can be easily managed by one single operator. These devices are the main cause for military aircraft losses in conflict scenarios. MANPADS pose an international threat and a global concern due to their proliferation and their use by terrorist and uncontrolled groups.