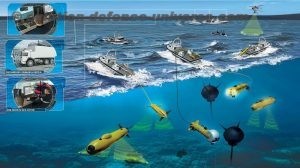 Paris. 05 May 2020. ECA Group has been awarded a significant export contract to modernize robots dedicated to naval mine warfare. This contract, worth around € 20 million will last over 48 months and will allow to modernize the mine clearance capacities of the customer, a Navy, in order to improve their performance against sea mines. The evolution of the mine threat in maritime areas is a current and growing concern for many countries.

The contract awarded in 2019 by the Belgian and Netherlands navies, for the renewal of their mine countermeasure capacities with innovative drone systems, has confirmed ECA Group’s  innovation capacity over the decades.

This new modernization contract confirms ECA Group’s capacity to push forward existing underwater mine clearance systems and bring them closer to the performance of the most recent ones. ECA Group is particularly proud of the trust placed in its expertise and solutions by navies worldwide. A trust renewed by this client already equipped with ECA Group drones for several decades.