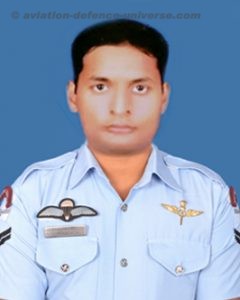 New Delhi. Corporal Jyoti Prakash Nirala was a specialist weapon operator in the IAF Special Forces Detachment. He was attached with 13 Rashtriya Rifles Battalion, under the aegis of ‘Op Rakshak’ in Jammu & Kashmir for active counter insurgency operations. On 18 Nov 17, based on specific tech intelligence, an offensive was launched jointly by the Garud detachment and 13 RR in Chanderger village of Bandipora district in J&K. The Garud detachment covertly approached the target house where the suspected terrorists were hiding and laid a close quarter ambush. Cpl Nirala, displaying exceptional battle craft, positioned himself close to the approach of the hideout, thus cutting off all possibilities of an escape by the insurgents. Laying this ambush itself at such close quarters demanded a very high degree of courage and professional acumen.

While the detachment laid in wait, six terrorists hiding in the house, rushed out, shooting and lobbing grenades at the Garuds. Cpl Nirala, disregarding personal safety and displaying indomitable courage, retaliated with effective lethal fire and gunned down a category ‘A’ terrorist named Ubaid Alias Osama Jungi (nephew of LeT commander Zaki Ur Rehman Lakhvi). Readjusting his position to protect his colleagues and preventing other terrorists from escaping, Cpl Nirala killed one more category `A+’ terrorist, named Mehmud Bhai (LeT North Kashmir commander) and injured two others. In this violent exchange of fire, Cpl Nirala was hit by a volley of small arms fire. Despite being critically injured, the Corporal continued retaliatory fire. Subsequently, he succumbed to fatal gunshot wounds received in the fierce encounter, which resulted in the killing of alI six dreaded terrorists.

For this act of most conspicuous bravery, pre-eminent valour and supreme sacrifice, Corporal Jyoti Prakash Nirala has been awarded Ashok Chakra (Posthumous).