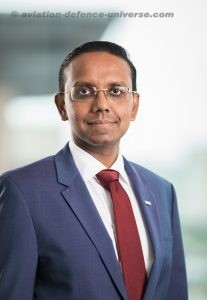 New Delhi. 16 August  2018 . Airbus has appointed Anand E. Stanley, a veteran leader in the global aerospace and defence industry, to succeed Pierre de Bausset as President and Managing Director of Airbus India. Pierre and Anand will work through a transition before the new appointment takes effect on October 1, 2018.

Anand, 41, brings a wealth of international experience in Sales, P&L management, M&A, Aftermarket and Manufacturing. His knowledge of the Indian market will deepen Airbus’ commitment to the local aerospace and defence industries, and will drive its indigenisation to boost India’s economic growth.

Anand will pursue the consolidation of Airbus businesses in India with a view to further reinforcing the position of the group for long-term success and growth in India.

“I am delighted to see Anand taking Airbus India’s leadership, building on the solid legacy left by Pierre de Bausset, relying on a robust team to drive the company on its next phase of growth,” said Patrick de Castelbajac, Airbus Executive Vice President Strategy & International. “Anand will successfully leverage the large fleet of our products flying in India, our support and services capability, the quality of our engineering team and the deep links that have been forged with local aerospace and defence industrial partners.

“I thank Pierre for his contribution over the past three years in implementing a new, better coordinated organizational structure in India, and meaningful engagement with the local stakeholders. His efforts have positioned Airbus as a robust partner in India’s industrial journey.”

A polyglot who has lived and worked in eight countries, Anand served as Global Executive Vice President, Strategy, at The Linde Group prior to joining Airbus. Anand started his aerospace career at Pratt & Whitney before holding multiple leadership roles within UTC and Lockheed Martin, including Head of Sikorsky’s Europe, Middle East and Africa region. Anand holds a bachelor’s degree in Engineering, an MBA from the University of Virginia-Darden. He is married and has three children.

An announcement about Pierre’s future role will be made in due course.