Airbus to be the platform for future Indian AWACS 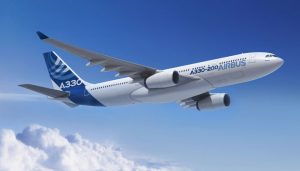 Bangalore. 16 February 2017. It was definitely not a surprise statement but an unexpected one from the Chief of Defence Research & Development Organisation (DRDO) Dr. S Christopher at the Aero India to a news agency that India will build six more next-generation Airborne Warning and Control Systems (AWACS) on the Airbus platform to enhance surveillance and detection with longer range and complete view.

He stated that once the Defence Acquisition Council (DAC) cleared and the Cabinet Committee for Security approved the proposal, the six AWACS would be made in seven years after the contract is signed with Airbus Defence & Space.

Spokesperson Airbus, in an exclusive with Aviation & Defence Universe (ADU) at the show said, “ we are encouraged by the comments of Dr. S Christopher. We have been in discussion with DRDO for some time , for using A330 as a true AWACS. We look forward to further discussing how the DRDO would like to take it forward.”

The plan for indigenous AWACS calls for DRDO to develop indigenously an airborne radar that will be mounted in a rotodome on top of the fuselage. Capable of electronic scanning, the radar will provide a 360-degree coverage. The Airbus A330 with a large cabin volume is eminently suitable and will have commonality with the civil aviation fleet of Airbus aircraft operating in the country thus facilitating maintenance support from the civil MRO industry.

India is considering a proposal to buy a total of six A330 aircraft on which the AWACS may be mounted, taking the value of the deal to around $2.5 billion. The first such aircraft could be inducted by 2025.

The radar system to detect far-off targets will be developed by the DRDO. Airbus Defence & Space was the only bidder for the AWACS India programme, making it the first single vendor project to be cleared by the NDA government. 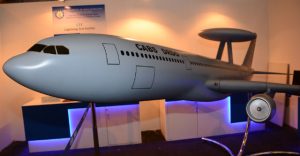 CABS has been entrusted with Design and Development of Airborne Surveillance Systems. The envisaged system will have uniform surveillance performance over full 360 degree coverage. The front end of the Radar and the Identification Friend or foe (IFF) systems shall be housed in an ellipsoidal radome on top of the fuselage installed using pylons. In addition suitable mechanical structures to transfer the air loads will be designed and housed in the radome. The radome also houses parts of the liquid cooling system(piping structure) and ladder system for maintenance.

Diameter of the radome will be (of the order of) 10.0 m, height of the radome(of the order of) 2.0 m, radome shape will be ellipsoidal, weight of the radome Shells (about) will be  1500Kg,  it shall be electromagnetically transparent in S and L band and should be able to withstand aerodynamic loads on the radome as per flight envelope of wide body aircraft. The radome shall have lighting detectors/dischargers and should have surface which will not permit ice accumulations and  shall have 4 shells (3 in case of design change) and shall be easy to install /de-install.

It will not be the first time India will have eyes in the skies but definitely first time Airbus is the envisaged platform. It may be recalled that A330 was the sole bid for AWACS-India project and it went through. 6 A330 shall be purchased with first two for prototype testing. The price tag is Rs. 51 billion (750 million Euros).