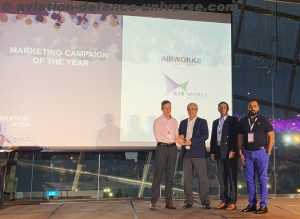 New Delhi.  21 September 2022.  Air Works – the nation’s largest independent MRO and aviation services and solutions major was adjudged the winner of the coveted Marketing Award at this year’s MRO Asia-Pacific Awards 2022, registering Indian MRO presence at this acclaimed, annual regional event, organized by Aviation Week, which is one of the most world’s foremost authentic voices in the aviation & aerospace universe.

This is Air Works Group’s second consecutive Marketing win at the regional Awards, having also won the Marketing Campaign of the Year Award, 2020 against stiff regional competition from leading MROs and aviation engineering companies such as SIA Engineering Company and ST Engineering, among others. The awards were announced at a glittering ceremony in Singapore, on the eve of Aviation Week’s MRO Asia-Pacific industry event. 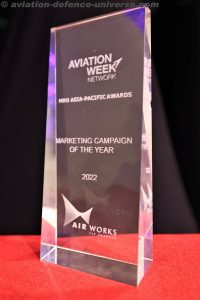 With this win, Air Works joined the league of select aviation players who have won such honours multiple and consecutive times. The award and more significantly, its recognition, represents yet another milestone for the Indian enterprise that has successfully navigated numerous aviation cycles in its
more than seven decades of operations, to emerge as the predominant player in the Indian aviation engineering and maintenance domain.

Commenting on the consecutive win, Mr. D Anand Bhaskar, Managing Director & CEO, Air Works said, “Bagging the ‘Marketing Campaign of the Year Award’ for two consecutive years reflects the strength of our brand’s value, manifested in our business and delivery capabilities. Such global
recognitions not only heighten the confidence of our customers and partners but also illustrate that Indian MRO firms are increasingly coming of age, and ready to compete and deliver on global standards, thereby laying the foundation for the eventual success of the entire Indian MRO ecosystem at a regional level”.

Regional recognitions such as this Marketing Campaign of the Year Award don’t just vindicate Air Works
position as one of the leading MRO players in the Asia-Pacific [APAC] region but also emphasise the increasing role and focus on Marketing and Brand building that is now beginning to be seen in the Indian aviation & MRO space, hitherto not witnessed in recent years. The growing focus on marketing in the aviation aftermarket, primarily B2B, also indicates the heightened action in a fast-evolving market with intensifying competition, rising capabilities, improving quality benchmarks and a structured and organized way of working – all indicators of a market that’s coming of age and enroute to becoming an MRO Hub.

“It’s a milestone moment for us in Air Works and I would like to offer our sincere thanks to the aviation
industry’s illustrious jury for adjudging Air Works as the winner of the regional marketing honor once again
this year. The award ratifies our ongoing transformation and our investment in our Brand Refresh campaign,
which is about revitalizing Air Works not only by adding some bold and vibrant colors to our palette reflecting our ambitions for the regional aviation & aerospace market along its innumerable opportunities, but subsequently bringing those instances to life, via business articulations using a comprehensive communications campaign, that evokes an honest pride in being an Air Works citizen.” said Mr Gaurav Sahni, AVP and Head, Brand & Communications.

He further added, “India is already the third largest civil aviation market in the world and wins of such repute have the potential to galvanize the entire Indian MRO sector to realize its true potential on the global stage”.

Air Works has continued to add milestones in its organizational and business transformation journey. Earlier
this year, the Group was honored with dual awards including the “Best MRO Service Provider” by the Ministry of Civil Aviation, India. Air Works also received the “Best MRO Achievement Award 2021” at ASSOCHAMs 13th Annual Conference cum Awards on Civil Aviation and Cargo in March this year. Above all, Air Works’ brand-new, twin hangar, narrow body maintenance facility at Kochi, Kerala recently received EASA certification. The company has also been reinventing itself by bringing digitization to the forefront – not just in operations but also using it for analytics-based decision making, using its innovative and award-winning solution mSights – Maintenance Insights. Air Works also uses its proprietary ERP Platform – Titan – that is conducive for MRO operations and has been recognized for deploying smart & innovative technologies such as AI & RFID for business transformation and efficiencies.

The Group is not only India’s largest provider of Line Maintenance services to global airlines, but also is certified to maintain more than 50 types of aircraft, making it also the most diversified MRO in the country with a pan-India presence in 27 locations with more than 1300 employees. It also provides commercial aimanagement services and aircraft finishing services apart from MRO-related offerings. Its customers includes both civil (fixed wing + rotary wing) and military customers apart from global OEMs, commercial airlines, business aviation companies, and leading global Lessors.