Air Marshal BS Dhanoa to be the next Air Chief 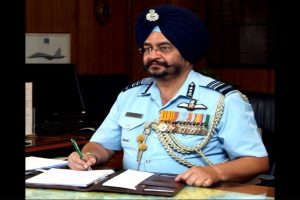 Commissioned in the IAF in June 1978 as a fighter pilot, Dhanoa is an alumnus of Rashtriya Indian Military College, the National Defence Academy and the Defence Services Staff College, Wellington.

Born on September 7, 1957, 59-year-old Air Marshal Dhanoa is expected to have tenure of about three years as the Chief of Air Staff. Born in Punjab’s SAS Nagar, Mohali district, Air Marshal Dhanoa comes from a family of war veterans. Prior to moving in as Vice-Chief, he was Air Officer Commanding-in-Chief, South Western Command.

Air Marshal Dhanoa is a qualified flying instructor and has flown various types of fighter aircraft in his successful career.During the Operation Vijay in 1999 (Kargil Operations), he famously commanded a fighter squadron and himself flew numerous night strike missions in the mountainous terrain.