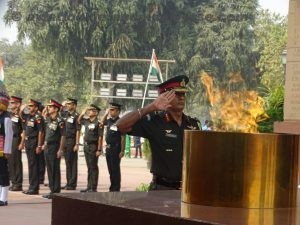 New Delhi. 01 November 2018. Army Aviation Corps celebrated its 33rd Raising Day on 01 Nov 2018, and to mark this occasion, a Wreath Laying Ceremony was held at the Amar Jawan Jyoti at India Gate, New Delhi. The ceremonial wreath was laid by Lieutenant General Kanwal Kumar, Colonel Commandant and Director General of Army Aviation, along with a host of serving officers, soldiers and veterans in attendance.

Army Aviation Corps is the aerial manoeuvre arm of the Indian Army and has played a stellar role by providing vital air support to our soldiers safeguarding the borders in addition to providing relief to the common man during times of natural calamity. The Corps is undergoing a massive transformation effort and expanding its fleet to augment its combat, tactical lift and surveillance capabilities to act as a potent force multiplier.