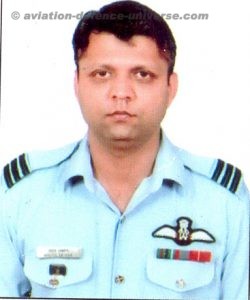 New Delhi. 26 January 2018. On Saturday, 11 Mar 17 at 0630 h the Unit of Wing Commander Anshul Saxena Flying (Pilot) was tasked for a casualty evacuation of an ITBP personnel from Zursar post, situated at a height of 17,000 feet on the Indo-China border. The patient had suffered a major heart attack and needed immediate evacuation to survive.

Wing Commander Anshul Saxena took stock of the situation and immediately activated the necessary services for launching the rescue effort. On the day of the planned evacuation the weather in the sector was marginal with poor visibility, strong winds and clouding which added to the extreme challenges of high altitude faced by the pilots, Wg Cdr Saxena took the responsibility to lead a two helicopter formation himself for the rescue in the marginal weather. Quick reaction and exemplary planning by him ensured that the mission was underway in the shortest possible time. The risk and challenges faced in such a high altitude evacuation whilst negotiating poor visibility and heavy turbulence are of a very high order. He has more than 4400 hours of accident/incident free flying over varied and extremely challenging terrain.

Another risk faced by the officer was the proximity of the rescue site to the International border with China and obstructions near the helipad which demanded extremely skillful handling of the helicopter at the limits of flight envelope. While approaching the helipad at an altitude of more than 17,000 feet, the weather deteriorated further and visibility dropped to barely 500 m. Wg Cdr Saxena quickly and correctly assessed the situation. He had the option to turn back as a slight misjudgment could have resulted in an adverse situation. He displayed exceptional courage and took a conscious decision to evacuate the seriously ill ITBP personnel. He advised the other member of the formation to hold clear in the valley while he landed to pick up the casualty. While on short finals to land at the unprepared (kutcha) helipad, there was very limited oxygen, varying winds, turbulence and snow bowl which grossly increased the danger of landing in a high altitude helipad.

Displaying courage and superior flying skills in the face of adversity, Wg Cdr Saxena executed a safe landing. After picking up the casualty, he again successfully negotiated marginal weather en-route to land at Loma, where he personally undertook a quick turn-around servicing of the aircraft to continue further flight to Leh. He landed safely at the 153 General Hospital at Leh with the casualty on board. He therefore, kept the highest traditions of IAF and set an example for his subordinates by saving the life of the ill personnel.

For this courageous act of professionalism and undeterred valour in which a precious life was saved by timely evacuation of a combatant from an extremely challenging helipad, Wing Commander Anshul Saxena has been awarded Vayu Sena Medal (Gallantry).

Published in Indian Airforce and Salute To Soldiers