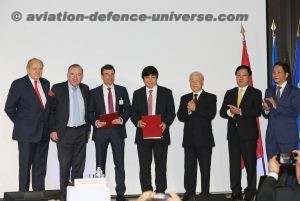 Speaking at the Signing Ceremony, Vietjet’s Vice President Dinh Viet Phuong said: “Today agreement marks a new milestone in strategic partnership between Vietjet and Safran – CFM. We are convinced that new engines will improve our operation capability, which enables us to fulfill our long-term development strategy to global market and better our services. We also believe that the new agreement will contribute positively to the economic and trade exchange between Vietnam and France, and create more jobs for the two peoples.”

“We are very pleased to be an integral part of Vietjet Air’s long-term growth strategy,” added Philippe Couteaux, Senior Vice President, Sales & Marketing at Safran Aircraft Engines and CFM. “This MoU is in line with our recent commercial agreements with VietJet Air and also reflects the relationship of mutual trust between the airline and Safran Aircraft Engines and CFM. VietJet Air selected us because of our recognized expertise and experience in support services.”

While in France, Vietjet’s leaders also inked a finance agreement with GECAS France on purchasing and leasing six A321neo aircraft worth US$800 million.