Home › Did You Know This? › Training Combat Forces Through Ninjutsu-Martial Art 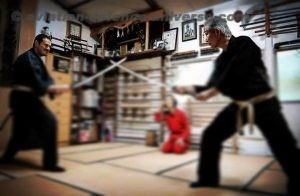 Larnaca, Cyprus. 02 September 2020. “The Asian martial arts have received a tremendous amount of exposure in the past century and are now almost universally known. One reason the Asian fighting methods have flourished is they’ve changed with the times. Many were “modernized”—in other words, they were altered from methods of pure combat to means of self-improvement and spirituality, based mainly on Buddhism but also influenced by Taoism and Shintoism. Ninjutsu training has gone ahead and become more relevant at the present day with the training of  combat forces. It is a classical military science, tactics and strategy of combat,” said Dr. Kacem Zoughari in an exclusive interview with Aviation & Defence Universe (ADU).

ADU.  Warfare is as ancient as human beings. From your experience is there any difference between the war tactics through the history of Japan and the modern world?

DKZ.  No. What you must understand is that ‘Heihō (兵法),  poorly and limitedly translated as strategy, means something more wide and deeper. It includes all the aspect and sciences that deal with combat, large and small scale, tactics, strategy, intelligence, warfare, spying, diplomatic, management, leadership, combat, psychology, behavior study, etc.  It came from China to Japan around the 7 century, through The Heiho shichi-sho (兵法七書), The seven treaties on military science of combat, which have been brought from monks, who went to china as diplomats or to learn deeper various discipline including bouddhsime and they bring those treaties in Japan. These treaties, which include also the famous ‘Sun Tzu’ ‘Sun Wu Lao Tzu’, (Sonshi no Heihō in Japanese) and all the texts have been studied and applied in the battlefields and during various fight and critical situation. All those experiences will create a certain vision of life and use of the body applied to war and combat. From those experience, famous phrase like “If Know yourself like you know your enemy, you will not loose one battle”’ are studied everywhere in any corps of doctrine that deals with combat and strategy. I don’t think its the origin of the phrase, the doctrince or the science that matters, what really matters here is the capacity to materialize those kind of phrase and apply it in real combat, real situation.  How it can help to face present problem by using science and knowledge from the Past. To my point of view, there is no difference between the past and now.

ADU. Has the advent of technology got a change in the use of the artform in military?

DKZ. The major change is now the development of technology. The advanced technology of weaponry, communication, etc. are important aspect to mention. But behind this evolution, behind each weapon, radars, telecommunication, computer, etc. there is a men and women in uniform. The way this evolution went, took various modern disciplines such as sports martial arts, changed sometimes in kind of closes combat or other self-defense methods, but still based on sports martial arts. Then there is special training and formation according the field or the corps such as special operatives, special forces, etc. This is a sort of sports education and I understand it’s a part of military training. This is the reason why the need of creating courses like close combat.

A warrior or professional soldiers must be always well versed to the different art and technics of combat, fighting. Every aspect and every dimension of a combat, large or small scale. No matter which weapons used there or there is investigation or infiltration. 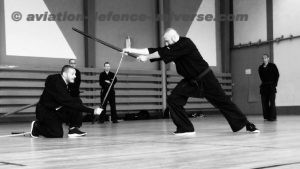 ADU. What lessons can be learned from martial arts on how to train modern soldiers or pilots both physically and mentally?

DKZ.  Here again you don’t teach sports to people who go to serve with their lives . You don’t teach sport martial art to someone who is in a situation between life and death. They have to be in trained in certain ways to use their bodies for the extreme situations. I don’t think boxing, karate or MMA (Mixed Martial arts) can be of help for those situations. It helps to a certain level, but not for real fight or combat. You can ask people who are there on the battle fields if really these are useful. For example, one has to fix the weapon and if you accept the aspect of martial art which says “the form follows the function” so automatically you need to weaponize the way you want to strike.

Similarly in case of pilots of air force you have to work your body in a certain way in order to swing according to the plane and most of the times in your head. They think and they visualize what they should do. There are many movements in classical martial art like ‘the sword movement’, ‘spear movement’ and ‘naginata movement’ where you form a straight line but you are more in a curve. So there are many things that can be taught according to the field of application.

As the age progress they will not have the stamina to understand ‘economy of movement’ so it goes with economy of energy, economy of space and economy of knowledge.

ADU.  How does martial art prepare the fighters to cope with failure scenario?

DKZ.  Martial art is based on failure experience, and it help to elaborate all the possible failure scenario. Ninjutsu’s essence is to prevent the danger and prepare all the countermeasure to face it. You can survive if you can escape and then you can analyze and hit back.

About post traumatic experiences and how to deal with will depend on what kind of martial art one is practicing. Killing people, splattering blood, atrocities and all the devastations can change human and so you need to have some spiritual background. One has to work out to balance the mind and heart. They understand the value of life and hence measure the priorities. So it’s all about how you shape your body, your heart and mind with time. Each individual has a certain way to face the trauma. When you practice an art form like Nine Ryu-ha which can be fatal at times you need to have a right heart.

ADU. You have spent most of your life studying martial arts history and you are practicing martial arts in classical fashion inspired by ancient Japanese teachings. We would like to know more about you.

DKZ.  I practice and study the science of combat from Nine different Ryu-Ha, or current of classical martial arts. Each of those Ryu, propose different level of using the body, weapons, all the dimensions of combat, strategies, tactics, warfare, behavior study, environment study, etc. It provide a unlimited view and multitude application in any kind of situation as well as the capacity to adapt, to create, and improve. Those Nine ryu ha, are the base of the teaching of the organization known as the Bujinkan. But rather to be attach to the Bujinkan’s ranks system and politics, I prefer focus and devote my time and energy to the substance from the nine ryu-ha’s transmissions.

Presently I reside in Paris and regularly visit various cities of the world for seminars and conferences and I spent most of my time in research writing.

25th January in history
View All
Battle Ground COVID 19
Did You Know This?