The Soldier on Foot Always Lives in Our Hearts 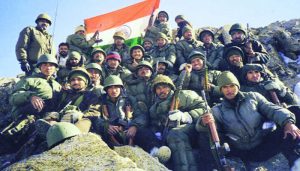 By Sangeeta Saxena & Brig. VK Atray
New Delhi. 27th October,2016. What legendary Field Marshal Montgomery said then is also the valid today , “The least spectacular of all arms, but without which you can do nothing, nothing at all,”. Even in this age of hi-tech weaponry, it is the foot soldier who ultimately delivers. Guns, missiles, rockets, fighters and submarines-to name a few- only tame the adversary. Victory is established only when the Infantry soldier raises the national flag on captured territory.
Infantry is the basic fighting arm , an arm of close combat, ensures enemy defeat and thus becomes the most indispensable in any army. And India is no different.
Like all armies the world over, infantry is the prime arm of the Indian Army. Army is the final bastion of the nation’s security and Infantry ensures its achievement. The Gorkhas, the Sikhs, the Marathas, the Rajputs, the Punjab, the Parachute Regiments, the Bihar, the Mahar, the Jat, the Kumaoun, and many more have been a part of the great traditions of the Indian Army and even today give it the formidable strength.
Queen of the battle field, the Infantry plays the key role in ensuring actual occupation of territory on ground, in war, peace and low intensity conflict. And Infantry has been proving this since its inception. And this is when it is woefully short of bullet proof jackets, surveillance equipment for day and night, GPS, even updated maps and communication equipment, needs a rifle to the right friend in need, has obsolete Tactical Communication , Battlefield Surveillance and Battlefield Management Systems. The government is trying to make it state-of-the-art, but the speed of change needs to be quickened.

27 Oct, is celebrated as Infantry Day by the Indian Army as it was on this day (27 Oct 1947) that a Company of Infantry of The First Battalion of the SIKH Regiment was airlifted from Delhi to Srinagar, to liberate Kashmir from the invading tribals supported by the Pakistan Army. This action was ordered by PM Jawahar Lal Nehru after Maharaja Hari Singh of Jammu and Kashmir signed the Instrument of Accession, acceding his kingdom, “Jammu and Kashmir” to independent India. Another significance of this day is that it was on this day in 1947 that India as an independent nation was first time engaged in operations against an aggressor.

Infantry is the largest fighting arm of the Indian Army, also popularly known as the “Queen of the Battle”, it is the backbone of the Indian Army and its soldiers bear the main brunt in any battle. Physical fitness, aggression and discipline are the basic qualities required in these men. The Infantry units of Indian Army have been modernized, equipped and trained to make the Indian Army amongst the best in the world.

On this occasion it would be pertinent to recollect that Pakistan Army had launched ‘Operation Gulmarg’ in early October 1947 using tribals to annex Jammu and Kashmir. Hostilities began in early October 1947, when a tribal rebellion was instigated in Poonch in Southwest Kashmir. By 20th October the Pakistani Army entered the conflict in support of the tribal forces. On 22nd October, 1947, a Lashkar of five thousand tribals invaded the Kashmir Valley from Abbottabad. On 26th October 1947, Maharaja Hari Singh signed the Instrument of Accession thus making Jammu and Kashmir an integral part of India and the Indian Army was thereafter ordered to evict the invaders. The entire campaign was predominantly Infantry centric and its commencement on 27 October 1947 is commemorated as ‘Infantry Day’.
As the Indian Army celebrated 69th Infantry Day with traditional solemnity and gaiety all across the various formations, let us remember-The ‘Best Soldier’ of the world cannot have second best weapon, equipment or clothing. The modernisation process should be aimed to harness advanced technologies to enhance the operational capabilities of Infantry across the full spectrum of conflict. Hope the powers that be ensure this.