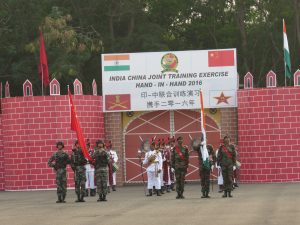 Pune. 16 November 2016.  Sixth Sino-Indian Joint Training Exercise “Hand – in – Hand 2016”  too off at the parade ground in Aundh Military Camp, in the presence of Maj Gen Y K Joshi, Additional Director General of Military Operations of Indian Army and Maj Gen Wang Haijiang of the People’s Liberation Army and other senior army officers of both the countries.

The parade was commanded by Lt Col Li Guanghua, Commanding Officer of People’s Liberation Army. Both the senior military officers addressed the contingents before Maj Gen Wang Haijiang of Chinese Army declared the Joint Exercise open. The aim of the joint exercise is to acquaint both the Armies with each other’s operating procedures in the backdrop of counter terrorism environment. 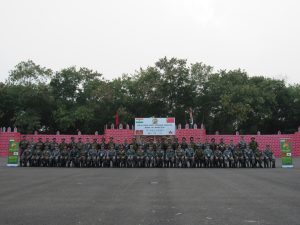 Earlier on 15 November, the Chinese contingent from the 13 Group Army, Chengdu Military Region comprising of one Infantry Company along with supporting staff landed at the Lohegaon airfield in two IL- 76 Aircrafts from China. The 13 day schedule is focused upon training on crossing of obstacles, special heliborne operations, firing of various weapons, handling & neutralization of improvised explosive devices and conduct of cordon & search operations in insurgency and terrorism environment.

The basic objective of the training is enhancing confidence and trust between the two armies which may be called upon to grapple with anti terrorism operations under the UN mandate. The conduct of Joint Military Exercises is also an important step to uphold the values of Peace, Prosperity and Stability in the region. 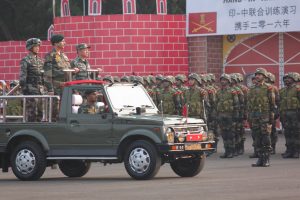 The Opening Ceremony was followed by both the contingents displaying their weapons which included assault rifles, grenade launchers and other sophisticated equipment. The Ceremony concluded with an enthralling and mesmerising display of India martial arts of Kalyaripattu, Khukri dance and Malkhamb by soldiers of Indian Army and a massed martial arts display by the Chinese contingent. The exercise will terminate on 27 Nov 2016.