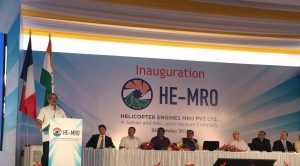 New HE-MRO centre will support Indian helicopter operators
Goa. 25 October 2016. What started as a signing ceremony between the French and Indian majors at Farnborough Air Show culminated with the inauguration of the joint venture  and the MRO becoming operative.
The Indian Defence Minister, Manohar Parrikar inaugurated Helicopter Engines MRO Pvt. Limited (HE-MRO), a Joint Venture of Safran and Hindustan Aeronautics Ltd. (HAL). This Joint Venture will support helicopter engines operated by national and international operators from a 1,000 sqm office and a 3,800 sqm shop facility.
This new centre will provide maintenance repair and overhaul (MRO) services for Safran TM333 and HAL Shakti engines installed on HAL-built helicopters. It will start its activities in 2017 with a capacity of 50 repaired engines a year and a full-capacity goal of 150 in the coming years. By then, the initial staff of 30 will also grow to 100.
The centre’s capabilities may be enlarged to include other engines as mutually agreed. Safran Helicopter Engines and HAL will provide their customers with a first-class service including optimized engine availability.
T. Suvarna Raju, HAL Chairman and Managing Director said: “HE-MRO reflects the close relationship 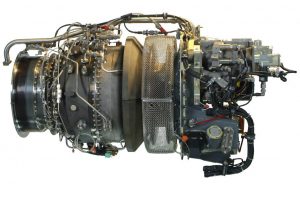 established over many years between HAL and Safran Helicopter Engines. This new MRO centre will improve customer satisfaction through improved serviceability and reduced cycle time” he added.
With a fleet of over 1,000 engines, including 250 TM333 and 250 Shakti, India’s armed forces are one of the largest operators of Safran-designed helicopter engines. Shakti is the Indian designation for the Safran Ardiden 1H1, co-developed with HAL and produced under license.
Bruno Even, Safran Helicopter Engines CEO, commented “HE-MRO marks a new step in the long lasting and fruitful partnership between Safran and HAL. We are extremely proud of the continued confidence placed in us by HAL. Together we are committed to delivering world-class support to our customers, both in India and throughout the region”.
Shakti is fitted to HAL’s ALH/Dhruv and has been selected to power the HAL-designed Light Combat Helicopter (LCH). The Ardiden 1U variant powers the new Light Utility Helicopter (LUH), a three-ton single-engine aircraft that made its maiden flight in September 2016.
Safran has maintained a presence in India for over 60 years in its three core markets – aerospace, defense and security. With a workforce of 2,500 domestic employees, its activities range from R&D to design, production and maintenance. Safran now powers and/or equips 65% of Indian airplanes and helicopters, and is the chief supplier of key systems and equipment for the Rafale.
Besides helicopter engines, Safran has partnered with HAL over decades through local businesses such as Aircraft Engines (180-employee JV in Bangalore) and Electronics & Defense equipment (Inertial Navigation Systems & Automated Flight Control Systems).
Share this on WhatsApp