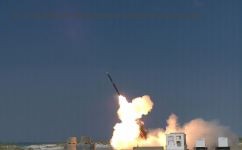 The two companies have demonstrated GLSDB’s capabilities for ground forces during a test fire where the laser-enabled weapon successfully launched and then tracked and engaged a moving target at a distance of 100 kilometers. The demonstration was conducted in cooperation with the U.S. Army Aviation & Missile Research, Development and Engineering Center (AMRDEC) in 2017.  AMRDEC provides increased responsiveness to warfighters through aviation and missile capabilities and life cycle engineering solutions.

During the test fire, the Saab-Boeing team successfully launched a GLSDB, enabled with a semi-active laser seeker, from a ground test location. The SDB and rocket motor separated at the necessary height, and the weapon engaged the intended maritime target at approximately 100 kilometers away from the launch site, using the SDB’s proven flight maneuverability capability.

“The investments Saab and Boeing have made in Ground Launched Small Diameter Bomb have resulted in a new, effective use for one of the world’s most reliable weapons,” said Kory Mathews, vice president of Weapons for Boeing Defense, Space & Security. “It is a rapid and low-risk option for ground artilleries needing to address today’s threats – where standoff capability to pursue moving targets is essential.”

Boeing and Saab are working together under a teaming agreement to offer GLSDB to current and future rocket artillery users, using SDB’s proven air-to-ground capability in a ground-to-ground fires role. In 2015, the companies demonstrated that the weapon could withstand a rocket artillery launch without its performance being compromised. Saab and Boeing continue to further develop the technology and integration to address current and emerging warfighter needs.