Online Media Briefing: Artemis I getting ready for launch 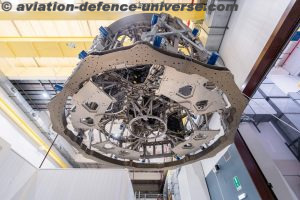 Paris, 18 August 2022 – Media representatives are invited to join a virtual Q&A session on Tuesday 23 August, 11.00 CEST to get more information about the upcoming Artemis I launch and the European contribution to the Artemis mission, the European Service Module (ESM) and the Orion spacecraft.

The first mission for Orion and the European Service Module will send the spacecraft beyond the Moon and back. This mission called Artemis I will not carry a crew but will instead be controlled from the ground.

NASA is targeting launch from Kennedy Space Center in Florida on Monday 29 August during a two-hour launch window that opens at 14:33 CEST (8:33 a.m. EDT), with backup opportunities on Friday 2 and Wednesday 5 September. A successful launch on Monday 29 August would result in a mission duration of approximately 42 days, with a targeted Orion splashdown on 10 October.
ESA has contracted and is overseeing the development of the European Service Module, that provides air, electricity and propulsion. Much like a train engine pulls passenger carriages and supplies power, the European Service Module will power the Orion Crew Module to its destination and back to Earth.

ESA is supplying the European Service Module in collaboration with its prime contractor Airbus. This is the only spacecraft presently capable of crewed spaceflight to, and high-speed Earth reentry from, the vicinity of the Moon.