Its official now! Donald Trump is the 45th President of the USA. 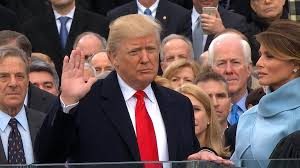 Washington. 20 January 2017. It will be America First from now onwards. Buy American and Hire American will be the way to build the nation.We will bring back our jobs, borders and dreams. And the list of quotes given by the 45th President of America Donald J Trump sending the media into a frenzy is long. He just walked out from the West Wing of the Capitol Building, after being sworn in and is all set to take USA 0n an unknown journey with the world watching in anticipation and with bated breath.

It was a strong message he said, ” for many decades, we’ve enriched foreign industry at the expense of American industry, subsidized the armies of other countries while allowing for the very sad depletion of our military, we’ve defended other nation’s borders while refusing to defend our own, and spent trillions of dollars overseas while America’s infrastructure has fallen into disrepair and decay.We’ve made other countries rich while the wealth, strength, and confidence of our country has disappeared over the horizon.One by one, the factories shuttered and left our shores, with not even a thought about the millions upon millions of American workers left behind.The wealth of our middle class has been ripped from their homes and then redistributed across the entire world.” 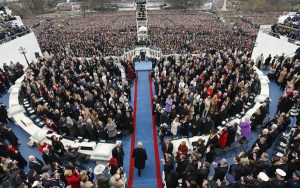 In what is a positive message for the world he stated categorically, ” We will reinforce old alliances and form new ones – and unite the civilized world against Radical Islamic Terrorism, which we will eradicate completely from the face of the Earth.” Countries which have been facing this menace are surely feeling reassured. A nationalistic speech – seemed like an extension of his campaign rally speeches.

The White House website states, “Our men and women in uniform are the greatest fighting force in the world and the guardians of American freedom. That’s why the Trump Administration will rebuild our military and do everything it can to make sure our veterans get the care they deserve. Our military needs every asset at its disposal to defend America. We cannot allow other nations to surpass our military capability. The Trump Administration will pursue the highest level of military readiness.”

It adds that President Trump will end the defense sequester and submit a new budget to Congress outlining a plan to rebuild the military. “We will provide our military leaders with the means to plan for our future defense needs.We will also develop a state-of-the-art missile defense system to protect against missile-based attacks from states like Iran and North Korea.”

It also says that cyberwarfare is an emerging battlefield, and US must take every measure to safeguard our national security secrets and systems. It will make it a priority to develop defensive and offensive cyber capabilities at the U.S. Cyber Command, and recruit the best and brightest Americans to serve in this crucial area. 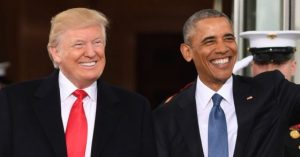 “Let us never forget that our military is comprised of heroic people. We must also ensure that we have the best medical care, education and support for our military service members and their families – both when they serve, and when they return to civilian life. We will get our veterans the care they need wherever and whenever they need it. There should be no more long drives. No more wait lists or scheduling backlogs. No more excessive red tape. Just the care and support our veterans have earned through sacrifice and service to our country. The Trump Administration will transform the Department of Veterans Affairs to meet the needs of 21st century service members and of our female veterans. Our reforms will begin with firing the corrupt and incompetent VA executives who let our veterans down, modernizing the bureaucracy, and empowering the doctors and nurses to ensure our veterans receive the best care available in a timely manner.Under the Trump Administration, America will meet its commitments to our veterans, ” says the site.

Also stated is the foreign policy. Peace through strength will be at the center of the foreign policy. This principle will make possible a stable, more peaceful world with less conflict and more common ground. “Defeating ISIS and other radical Islamic terror groups will be our highest priority. To defeat and destroy these groups, we will pursue aggressive joint and coalition military operations when necessary. In addition, the Trump Administration will work with international partners to cut off funding for terrorist groups, to expand intelligence sharing, and to engage in cyber warfare to disrupt and disable propaganda and recruiting.” 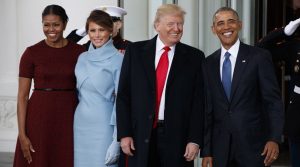 It also says , “Next, we will rebuild the American military. Our Navy has shrunk from more than 500 ships in 1991 to 275 in 2016. Our Air Force is roughly one third smaller than in 1991. President Trump is committed to reversing this trend, because he knows that our military dominance must be unquestioned. Finally, in pursuing a foreign policy based on American interests, we will embrace diplomacy. The world must know that we do not go abroad in search of enemies, that we are always happy when old enemies become friends, and when old friends become allies.”

The world is watching and it is time for Trump to convert words into action. Lets hope his America makes the world a better place to live in.