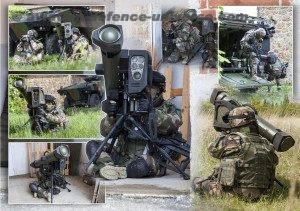 Paris. 03 October 2017. MBDA is pleased to announce the signing of Memorandums of Understanding with five Australian companies as part of its strategy to transfer the manufacture of its MMP missile system to Australia if it is selected for the $20bn LAND 400 program.

MBDA’s commitment to Australia is further underpinned by the intention to create MBDA Australia Pty Ltd, which we are also pleased to announce today.

“These companies are truly representative of Australia’s world class engineering capability and I am delighted that we will have the opportunity to work together on such an important program.” MBDA Australia Managing Director, Andy Watson said.  “We have been engaged with some of these companies for more than four years and LAND 400 is now providing the catalyst to allow us to take these relationships to the next stage”.

“MMP is the only fifth generation anti-tank guided weapon (ATGW) in production. It is the most advanced and lowest risk missile solution for Land 400 Phase 2 and offers unique technological and strategic benefits to Australia,” he said.

“MBDA’s approach to Australian Industrial Capability is based on two principles: ensuring the Commonwealth has the highest level of operational independence and sovereignty in its use of the missile, and generating real opportunities for Australian industry through the transfer of production capability, high value skills and cutting edge technologies”.

“Our vision is for MMP to become the first missile that is built, maintained and evolved in Australia. This means that the missile will be assembled in Australia, with key components and vehicle integration kits built by world-class Australian companies. We hope that these companies will become part of MBDA’s global supply chain for MMP and, in the future, for other MBDA systems.” Mr Watson said.

Dave Armstrong, MBDA’s Group Sales and Business Director, said “MBDA has had products in service in Australia continuously over the last 60 years with ASRAAM currently in service with the RAAF on the F/A-18A/B Hornet fleet.  We have a proven track record in working with Australia to support and develop its complex missile systems capability and we intend to build on this experience with Land 400 and future programs”.

“Today’s announcement is part of an ongoing program of Australian industrial engagement with further announcements to be made as our plans for missile build and longer term sustainment mature” Mr Armstrong said.