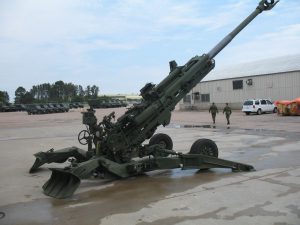 New Delhi/Pokharan. 01 June 2017.  There is many a slip between the cup and the lip could not have fitted better. When the two M777 Howitzers landed amidst open secrecy at the Delhi airport, little would have any one thought that the user trials for which the guns had arrived would get delayed for the want of the land identified for the purpose.

With the Mandir Samiti (Temple Committee) of Pokaran and the Army both staking claims to the land , the case went to the sessions & district court for redressal. Unfortunately Army lost the battle at this stage and has gone ahead to get a judgement from the high court on the case. As per the local winners their stake is genuine and the committee is confident it will win in the High Court too.

Amidst all the dispute the sufferer again is the Indian Army which is waiting to get the guns inducted. Hope Army  wins the case or finds another piece of land to conduct the user trials.