Leonardo attends the Langkawi International Maritime and Aerospace in Malaysia 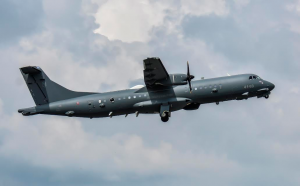 Langkawi, 21 March 2017 – Leonardo attends the Langkawi International Maritime and Aerospace (LIMA) 2017 in Malaysia as a stronger regional player in aerospace, defense and security solutions. Guests at Leonardo’s chalet and static area (no. PC02) and its stand (HD78) will be able to find out about Leonardo’s aircraft, helicopters and naval and airborne systems.

The company’s ATR 72MP, brought by the Italian Air Force, will be exhibited for the first time outside of Italy. The ATR 72MP is at the forefront of maritime patrol capability, enabling defence, homeland security and environmental protection missions. The aircraft is equipped with Leonardo’s ATOS surveillance mission system, which brings together the data collected by the aircraft’s suite of sensors, including the Seaspray AESA (Active Electronically Scanned Array) surveillance radar, and provides a single data-fused picture to the operators. In the static display there will be an AW139 intermediate helicopter of the Royal Malaysian Police, as an example of Leonardo’s capabilities in rotary wing. The AW139 is one of the two in service with the RMP, recently delivered to be operated for law enforcement missions. The AW139 is the most successful intermediate helicopter in the world with over 1000 units on order globally for a large number of applications.

Also on show at LIMA is the successful Leonardo’s SEER radar warning system, which builds on the company’s more than 100 years of experience in the electro-magnetic spectrum to keep crews aware of potentially hostile radar emitters.

At the show visitors will be able to experience, through augmented reality, new naval capabilities including a new multi-functional, fixed-face dual-band radar, friend-or-foe detection and infrared sensors for acquiring and tracking targets, integrated communications systems and satellite radio.Visitors will also explore further naval and land systems including the fire control system (FCS) NA30S MK2 and the Horizon camera. NA30S MK2 represents a new generation of FCS based on a single dual band offset antenna and a high range resolution dual-band radar (X and Ka) designed to control modern guns (up to three) against conventional and asymmetric air/surface threats, with a reduced reaction time. The Horizon camera employs the latest focal plane array technology to meet long-range surveillance and target identification requirements.

During the show the Italian Navy Frigate Carabiniere, a FREMM class ship completely equipped by Leonardo products and systems, will be docked along the maritime hall. Leonardo has had a presence for many years on board the Royal Malaysian Navy ships with its defence systems, including its 76/62mm guns and torpedoes, and with the Super Lynx 300 helicopters. It also has supplied AW109 twin-engine light helicopters to the Army. Malaysian armed forces, parapublic and commercial customers operate more than 50 helicopters for all applications including law enforcement, search and rescue, firefighting, offshore, passenger/corporate transport and anti-submarine warfare. Radar and communication systems have, for several years, contributed to widening the air defence, land security and control capabilities of the Malaysian Armed Forces and to managing the air traffic control of a number of civilian airports, such as Kuala Lumpur international airport, which is one of the largest in the region.

In the region, Leonardo boasts a presence across all its business areas, including aeronautics, with the tactical transport aircraft C-27J Spartan deployed by the Royal Australian Air Force, and the advanced M-346 trainer, for which the first export customer was the Singapore Air Force. In the field of helicopters, the armed forces and government agencies of Japan, South Korea, Australia and Philippines are long-standing customers of Leonardo helicopters, for a large number of roles.

Leonardo’s defence and security systems are aboard a large number of vessels, with 76/62mm turrets, radar and communication systems, and aboard a number of submarines, with Black Shark Heavyweight torpedoes, as well as Lightweight Torpedoes for surface vessels and under countermeasures