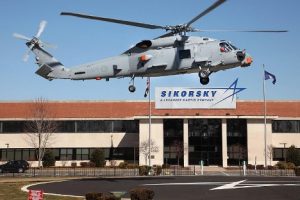 The new facility encompasses two buildings – a Maintenance Repair & Overhaul base and a Logistic Centre warehouse that will provide Through Life Support logistics services for the Royal Australian Navy’s new fleet of 24 MH-60R SEAHAWK helicopters. Based in Nowra on the New South Wales south coast, the 8,300 square metre facility will house Sikorsky’s Australia-based, Helitech, Lockheed Martin and the U.S. Navy.

“We are delighted to be here today with our U.S. Navy partners to hand over the keys to the final MH-60R SEAHAWK helicopter to the Royal Australian Navy, said Raydon Gates,” Chief Executive of Lockheed Martin Australia and New Zealand. “Lockheed Martin is proud of the team who have accomplished such an outstanding achievement, delivering to Australia the full fleet of SEAHAWKS on time and on budget.”

“We at Lockheed Martin are committed to securing and investing in the future of Australia. This facility in Nowra will house and maintain the new fleet, contributing to the local community and creating local job opportunities,” continued Mr. Gates.

The Commonwealth of Australia chose the MH-60R “Romeo” SEAHAWK helicopter in June 2011 to fulfill the Australian Defence Force’s requirement for a fleet of 24 new-generation, multi-role naval combat aircraft. The program has run on time and on budget with all 24 MH-60 Romeos now delivered to the Royal Australian Navy – a feat which saw the program win Australia’s Capability Acquisition and Sustainment Group “Project of the Year” award in 2015.

The hand-over occurred during a ribbon-cutting ceremony at Lockheed Martin’s purpose-built logistics and maintenance facility in Nowra which will house and maintain the new fleet.
The ceremony was attended by representatives from Lockheed Martin, the Australian Chief of Navy, Vice Admiral Tim Barrett, as well as officials from the New South Wales State Government, the Royal Australian Navy and the US Navy.