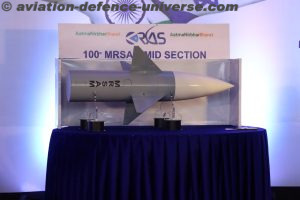 Hyderabad.  16 December 2022. Kalyani Rafael Advanced Systems Pvt Ltd (KRAS) recently rolled out the 100th Medium Range Surface to Air Missile Kit for delivery to the Indian Armed Forces. The kit is part of the MRSAM Air Defence Missile jointly developed by Rafael Advanced Defense Systems Ltd & DRDO and manufactured in collaboration with Indian industry comprising of both private and public sector players including MSMEs. The delivery of the 100th MRSAM Missile Kit takes place close on the heels of the delivery of the first firing unit to the IAF at Air Station Jaisalmer on 09 Sep 2021. 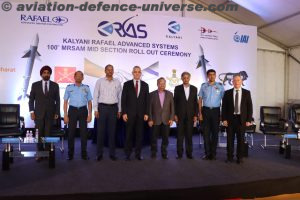 Speaking on the momentous occasion,  Baba N Kalyani Chairman, and Managing Director, Bharat Forge Ltd stated that “KRAS is proud to accelerate the delivery of the 100th MRSAM Missile Kit for the Indian Armed Forces. This delivery is not only a shining example of synergy between India & Israel and the private and public sector but also reinforces our commitment to AatmaNirbhar Bharat as envisioned by our Prime Minister  Narendra Modi”. He also added that “apart from the missile kits, we will extend our support in Maintenance and Repair Operations of in service Air Defence Missile Systems to the Armed Forces”.

During his address Major General Retd Yoav Har-Even President & CEO Rafael lauded the joint efforts of all stakeholders in this program. He stated that “We have been a reliable partner to the Indian Armed Forces for almost three decades and these missile kits are a testimony of our commitment to AatmaNirbhar Bharat. He also stated that KRAS being a joint venture is a testament to the enhance cooperation between Israel and India in the strategic defence sector, as it leverages the technology of Rafael with the engineering strength of the Kalyani Group.

The event was graced by other senior DRDO and military officials.