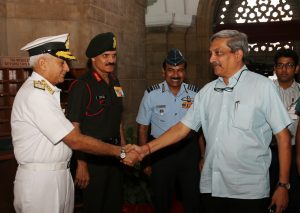 New Delhi. 23 June 2016. The Defence Minister Manohar Parrikar has stressed on the need for joint ness of the three Services to optimise resources and enhance cost effectiveness, so that maximum funds can be made available for modernisation of the Armed Forces.

Addressing the two day Annual Unified Commanders’ Conference (UCC) of Tri-Services Commanders which got underway, here today, Parrikar said, ‘by virtue of our dominant, geographical location, India is poised for a predominant role in the volatile region around us’. The Minister stated that hence, there is a requirement to exploit this advantage by developing Joint Capabilities. In order to achieve self-reliance, he emphasised on ‘Make in India’ initiative and indigenisation of defence production. 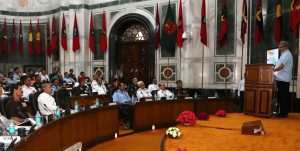 To keep in tune with the India’s ‘Act East Policy’,  Parrikar urged the Armed Forces for conduct of Joint Exercises involving more than one Service with our friendly foreign countries specially, in South East Asia. He commended the Armed Forces for their devotion to duty and the stellar role played by them in safeguarding the country’s unity and integrity. The Minister also paid homage to all valiant soldiers, sailors and air warriors for their supreme sacrifice in honour of the nation.

Earlier, opening remarks were given by the Chairman Chiefs of Staff Committee & Chief of Air Staff Air Chief Marshal Arup Raha covering Tri-Services issues. The Chief of the Army Staff General Dalbir Singh and the Chief of the Naval Staff Admiral Sunil Lanba addressed the conclave highlighting the major issues pertaining to their respective Services. A report covering major achievements on key Tri-Services issue was presented by Officiating Chief of Integrated Defence Staff to Chairman Chiefs of Staff Committee Air Marshal AS Bhonsle.

During the daylong conference, key security issues facing the Nation and important strategic, operational, logistical, administrative aspects pertaining to Tri-Services were deliberated upon.