Insighteon Consulting Builds Up Towards Another War Game

New Delhi. 24 July 2022. Modern Aero-Engines are regarded as the heart of present day Aerial Combat Platforms propelling Fighter Aircraft, Cruise Missiles, Unmanned Combat Vehicles and an emerging class of Autonomous Aerial teaming systems. These Aero-Engines have a major impact on the performance, reliability, mission accomplishment and even stealth capabilities of such aerial platforms. Being a critical technology whose invention was celebrated as the commencement of the “Jet Age”, it heralded a new era of aviation and aerial combat for Mankind since the 1940s. This marvellous piece of technology can rightfully be regarded as a crucial embodiment of a nation’s technological, industrial and strategic defence capability. Indeed, our ability to successfully introduce new generation aerial platforms hinges upon our ability to innovate and develop a new generation of aero-engines. 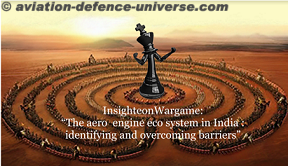 Insighteon Consulting, a pioneer consulting firm in Aerospace and Defence, continuing with a reputation of providing honest and forthright findings, has scheduled yet another war-game to identify barriers in the development of indigenous aero engines in India.

China was 20 to 30 years behind leading countries like the US in terms of jet engine development, and this gap is now being narrowed, possibly to 10 to 15 years. Thus, China’s technology gap with leading countries like the US in terms of jet engines has been narrowing significantly, and advanced technologies which help realise higher thrust-weight ratio, thrust-vector control, super cruise, lower thermal signatures and adaptive cycle etc.; are likely to progress at a faster pace and are currently under various stages of development. Such progress creates a greater technological asymmetry for India which needs to be overcome to safeguard its strategic interests and regional sphere of influence in the Indo-Pacific region.

The nature of warfare is changing and there is a shift in preference towards smaller, agile weapon systems deployed in larger numbers which have matching impact or even better efficacy compared to their predecessor platforms. This trend is visible in almost all types of weapon systems, with the most visible being the near dramatic change in aerial warfare with the advent of Artificial Intelligence (AI)  enabled Unmanned Aerial Vehicles (UAVs) or drones. The other area is the proliferation of long range and very long range missiles with terminal guidance, as exemplified by the ongoing conflict in the Ukraine. A number of countries have realised that a manufacturing ecosystem for jet propulsion technology is a necessity to protect their strategic interests. For those who have achieved success in this segment, it remains a closely guarded secret and no examples of wilful transfer of critical technologies exist as on date. The war-game will be conducted from 23 rd to 25 th August 2022 with a view to ascertain a roadmap for development of an aero engine eco system in India.

The analysts will include retired senior scientists, academicians, leaders from the Public Sector and Private Industry, defence officers, bureaucrats, diplomats and members of various think tanks. The participants will be given war-game appointments to represent all stakeholders and the complete engine ecosystem will be recreated. DRDO, NAL, HAL and private industry partners like Godrej Aerospace, Bharat Forge and Paninian India Private Limited, having already contributed a great deal in this segment, will also be participating.

To bring out the right predictions, the war-game intends to peep into the future and bring out all the challenges the nation could face in the aero engine segment. Besides, the war game is intended to be designed to provide helpful insights for actionable strategic decision-making.