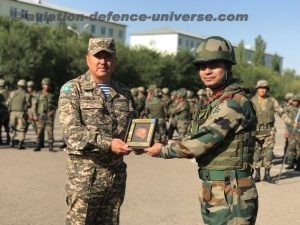 The opening ceremony was held today during which the Kazakhstan and Indian soldiers stood side by side and gave ceremonial salute to General Major Dzhumakeev Almaz, Deputy Commander for Battle Training, Kazakhstan Army reviewing the ceremony. This is the third edition of joint military training exercise between Indian Army and Kazakhstan Army. The 14 day long joint exercise is being conducted from 10 Sep to 23 Sep 2018.

The Kazakh contingent is represented by Military Base 85395 while the Indian side is represented by 5 LADAKH SCOUTS Regiment. General Major Dzhumakeev Almaz, welcomed the Indian contingent and in his inaugural remarks highlighted the common shared beliefs of freedom, equality and justice that are precious to both the nations. The magnificent opening ceremony conducted today started with briefing on Army organization and country presentation by both countries including display of weapons and equipments used by the Kazakhstan Army at sub-unit level.

The joint training aims to build & promote army to army relations and exchange skills & experiences between Indian Army and the Kazakhstan Army. Due emphasis will be laid on increasing interoperability between forces from both countries which is crucial for success of any joint operation. Both sides will jointly train, plan and execute a series of well developed tactical drills for neutralisation of likely threats that may be encountered in urban warfare scenario. Ex KAZIND-2018 will contribute immensely in developing mutual understanding and respect for each other’s military.