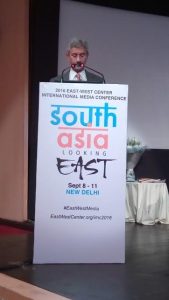 New Delhi. 09 September 2016. In a keynote address to the 2016 East-West Center International Media Conference, Indian Foreign Secretary Dr. S. Jaishankar said that India sits at an important geo-political crossroad, and that its ability to integrate more closely to the East has the potential to transform the Asian landscape.

In many ways, this eastward focus “has been the greatest change in my four decades as an Indian diplomat,” Jaishankar said. Having served in Japan, Singapore and China, he said, “I have some advantage of developing insights from field experience. In my view, the strategic implications of the eastward interface of the Indian sub-continent are still unfolding … and its quickening pace now certainly elicits greater attention.”
Domestic developments along India’s eastern seaboard are an important driving force behind the country’s economic transformation, he said, and today trade with the east is a high-priority agenda with significant implications for regional economies. Its aims include port modernization along with industrial and coastal community development, with the goals of increasing coastal shipping five-fold, transforming inland waterways and creating the kind of maritime infrastructure required by a more industrialized India.

Jaishankar said that physical connectivity across the region presents game-changing possibilities, not only for India’s relationship with Southeast Asian countries, but also for the economic future of its own eastern states. Key infrastructure projects such as the Kaladan “multi-modal transport” development linking the Indian port of Kolkata to Myanmar by sea, river and road, and the completion of a highway that would extend to Thailand, could help accomplish this objective, he said. Recent diplomatic visits to Southeast Asia have also highlighted the interest of nations there in further road connectivity to Vietnam.

Border agreements between India and Bangladesh have created a positive environment for the development of rail and road connectivity, inland waterways, coastal shipping and energy cooperation along the Bay of Bengal, he said, and India is also developing projects with southern Indian Ocean neighbors.

Expanding its maritime horizons has allowed India to emerge as a security provider and first responder to disasters in the region, he said, and this trend is likely to grow in the future for two reasons. First, India’s own economic capacities are expanding and could well make a quantum jump as its “Make in India” initiative takes off, with both demand- and supply-side enhancement efforts. Second, there is a trend toward a larger rebalancing of the global economy toward Asia that is set to enhance the importance of Indian Ocean as an “economic highway.”
“Being located at its center of gravity, India’s responsibilities towards safe and unimpeded flow of commerce grow commensurately in an era of greater burden sharing,” Jaishankar said. “It is likely that this role would itself become an additional binding force between India and its eastern partners, who are directly benefitted by a safer ocean.”

Political and security cooperation with Southeast Asian countries has expanded steadily and strengthened regional stability, he said, with India engaging the region through digital and physical connectivity projects, space technology initiatives and capacity building, including in information technology.
Japan and South Korea are also focal points of Indian “Look East” diplomacy. Both nations have already established strong credentials in India by virtue of earlier successful industrial ventures, Jaishankar said, but today with India’s increased focus on transformational infrastructure development, the expectations of global partners are higher.

New projects with Japan include plans for the construction of India’s first high-speed railway, expected to begin next year. There’s also a focus on security interests, as reflected in new joint annual exercises, an agreed defense framework and discussions on equipment and technology transfers. Meanwhile, ship-building, industrial parks, steel production and smart grids are among the priority projects with South Korea.
While China-India ties have been limited historically, with frequent friction over border disputes, relations have transitioned to peace and tranquility on their shared border, Jaishankar said, even as negotiations continue. Additionally, a rapid rise of trade with China has had profound, if mixed, implications. While it has allowed for some new capacities in areas like telecom and power generation, it has also impacted negatively on others, he said, with fair market access to China remaining an issue for Indian companies, including in globally competitive areas like pharmaceuticals and information technology.

Bilateral ties with Myanmar and Bangladesh are strong, substantive and rapidly expanding, according to Jaishankar. While there is still much work to be done, he said Myanmar has taken some important steps in its democratic journey, development work, national integrity and governance processes. Conversely, in Bangladesh, secularism and pluralism are under stress, he said, and must be supported without hesitation.
Jaishankar said India has emerged as a champion of regionalism and is vigorously promoting more cooperation and connectivity. It has displayed a growing ability to be patient, flexible and creative, with an approach to regional relationships that takes into account the need for a balanced and participative Asian security architecture, he said.