By Chaitali Bag, Aboard IAC Vikrant

Kochi, India. 02 September 2022. It is an airfield on sea and a city on water owned by Indian Navy. The force till yesterday had only one such city and today has two. INS Vikrant entered the fleet today thereby giving  Indian Navy more teeth. 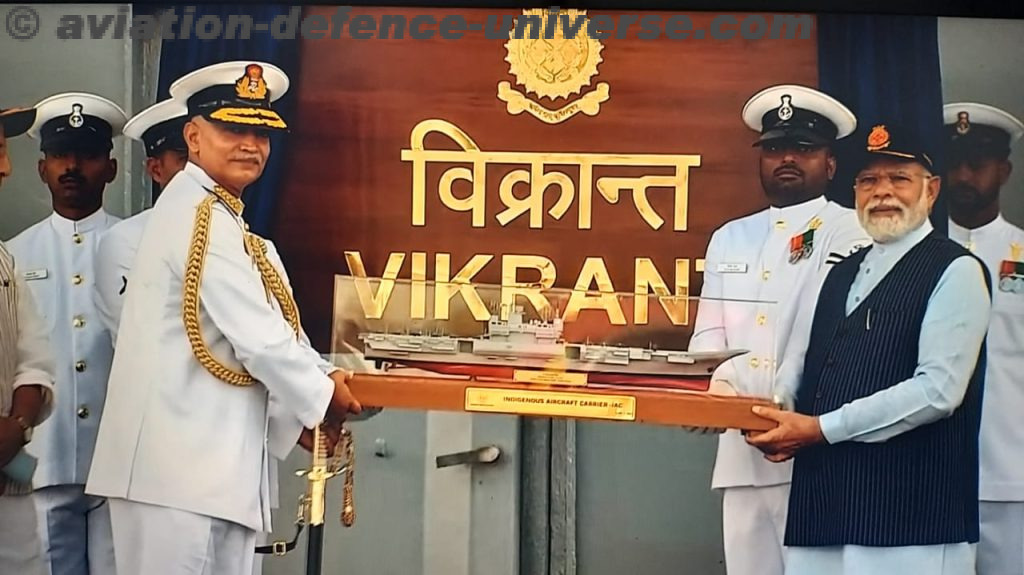 Ships never die and hence the legend is back into the force. Indian Navy’s erstwhile  Vikrant was a Majestic-class aircraft carrier of the Indian Navy. The ship was laid down as HMS Hercules for the British Royal Navy during World War II, but was put on hold when the war ended. India purchased the incomplete carrier in 1957, and construction was completed in 1961. Vikrant was commissioned as the first aircraft carrier of the Indian Navy and played a key role in enforcing the naval blockade of East Pakistan during the Indo-Pakistani War of 1971. In its later years, the ship underwent major refits to embark modern aircraft, before being decommissioned in January 1997. She was preserved as a museum ship in Cuffe Parade, Mumbai until 2012. In January 2014, the ship was sold through an online auction and scrapped in November 2014 after final clearance from the Supreme Court. 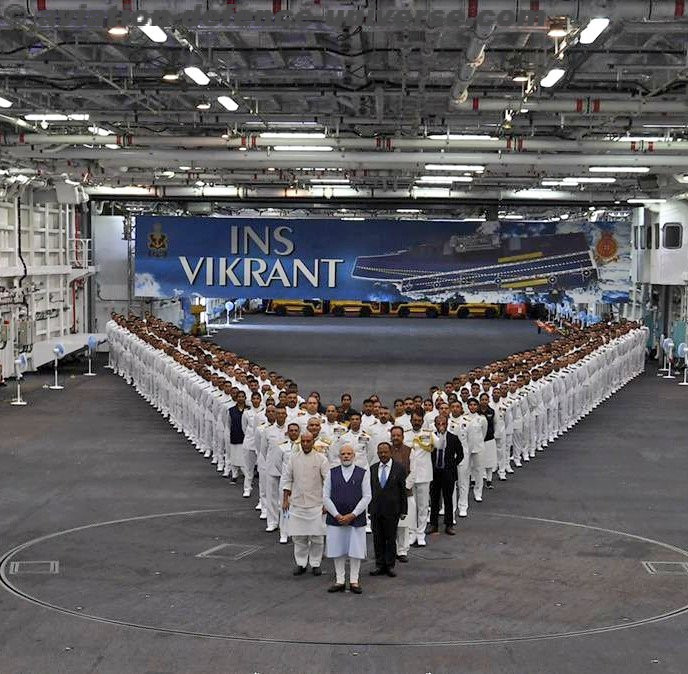 And then came the day when the dream of  having an indigenously made Vikrant has been realised and India now stands in the league of nations like US, UK, France, China and Russia. Indian Navy today went ahead by leaps and bounds.

Speaking on the occasion, Chief of the Naval Staff Admiral R Hari Kumar who has the distinction of commanding the now decommissioned INS Virat rieterated that Indian Navy’s resolve for [email protected] is to become completely self-reliant until 2047, consisting of ‘Made in India’ ships, submarines, aircraft, unmanned vessels and systems and remain a ‘Combat Ready, Credible, Cohesive and Future-Proof Force’.

It was breath-taking display of naval prowess by Indian Navy’s aviation wing today in skies above the Vikrant in Kochi. Three Chetak helicopters, three Advanced Light Helicopters  (ALH) ,  three Sea Kings, three Mig-29s and one P-8I flew above the Arabian Sea in Kochi welcoming the newly commissioned INS Vikrant into the fleet. On the fly deck were ALH Dhruvs , Kamov-31s and Mig-29s standing in resplendence.

It is expected to carry an air group of up to thirty aircraft, which will include up to 24–26 fixed-wing combat aircraft, primarily the MiG-29K, besides carrying 10 Kamov Ka-31 or Westland Sea King helicopters. The Ka-31 will fulfill the airborne early warning (AEW) role and the Sea King will provide anti-submarine warfare (ASW) capability.

The ship has a height of 61.6 metres  and the flying deck is about 12,500 sq m  making it the size of two-and-a-half hockey fields. The cabling used in the ship is 2,600 km long and the power generated by the vessel is enough to light up a small town. It can carry a crew of over 1,600, and has its own hospital, fitness centre, kitchen, and laundry. Doesn’t it seem incredible?

Indian Navy and Cochin Shipyard have achieved this gigantic  result in collaboration with many other organisations. The Defence Metallurgical Research Laboratory (DMRL) and Steel Authority of India Limited (SAIL) created facilities to manufacture the DMR 249 grade steel in India. Reportedly, 26,000 tonnes of three types of special steel for the hull, flight deck and floor compartments were manufactured at the Bokaro Steel Plant, Jharkhand, Bhilai Steel Plant, Chhattisgarh and Rourkela Steel Plant, Odisha. Due to this, Vikrant is the first ship of the Indian Navy to be built completely using domestically produced steel. The main switch board, steering gear and water tight hatches have been manufactured by Larsen & Toubro in Mumbai and Talegaon; high-capacity air conditioning and refrigeration systems have been manufactured in Kirloskar Group’s plants in Pune; most pumps have been supplied by Best and Crompton; Bharat Heavy Electricals (BHEL) supplied the Integrated Platform Management System (IPMS), which is being installed by Avio, an Italian company; the gear box was supplied by Elecon Engineering; and the electrical cables are being supplied by Nicco Industries. Fincantieri provided consultancy for the propulsion package while Russia’s Nevskoye Design Bureau designed the aviation complex.

The Chief of the Naval Staff exhorted the Commanding Officer and crew of INS Vikrant to take forward the proud legacy of erstwhile Vikrant which served the country for 36 glorious years and played a significant role in the 1971 war.