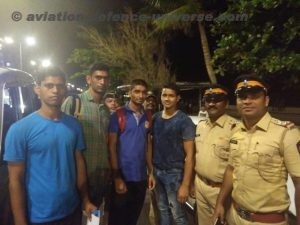 Mumbai . 11 September 2018. Three young sailors of the Indian Navy, Akash ME I, Dhananjay, SEA I, and Vishwakarma ME I, were instrumental in rescuing a man who had fallen into the sea off Marine Drive on the night of 09 September.

The sailors were visiting Marine Drive when they noticed people gathering at a spot nearby. On reaching the spot, they observed a man drowning about 150 m into the sea. The man’s hands were seen flailing as he struggled to stay afloat.

Akash, a Ship’s Diver, Dhananjay, a good swimmer, and Vishwakarma, a Marine Commando, immediately jumped into the water and swam out towards the drowning man. They brought the man to safety and administered CPR since the man had, by then, become unconscious. Once the man began breathing and regained consciousness, the sailors handed the man over to the local police. Their selfless and prompt act of bravery is in keeping with the finest traditions of the Indian Navy.