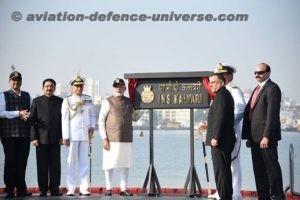 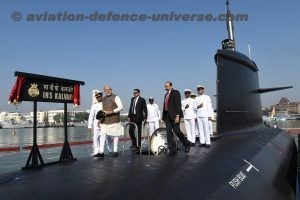 INS Kalvari is manned by a team comprising 08 officers and 35 sailors with Captain SD Mehendale at the helm as her first Commanding Officer. The commissioning will augment the offensive capability of the Indian Navy, and the Western Naval Command in particular.

Prime Minister, Narendra Modi, dedicated the submarine to the nation, at a function in Mumbai. Congratulating the people of India on this occasion, the Prime Minister described INS Kalvari as a prime example of “Make in India.” He commended all those involved in its manufacture. He described the submarine as an excellent illustration of the fast growing strategic partnership between India and France. He said the INS Kalvari will add even more strength to the Indian Navy.

The Kalvari class submarine is based on SCORPENE® class diesel-electric attack submarines designed by Naval Group and built by MDL. As a part of “Make in India” initiative, the Group has set up a sound defence industrial ecosystem for the indigenous content of the P75 submarines. Therefore, a significant part of the high-tech equipment supplied by Naval Group, has been produced in India in the frame of indigenisation.

Congratulating the MDL for restarting the production line of submarines once again, Nirmala Sitharaman, the Defence  Minister thanked the Yard workers, who she said “mattered high on this day”. The process of submarine construction has again been started in the country and it should not stop she emphasised. 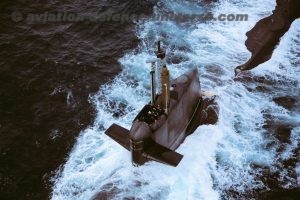 Welcoming the gathering, Admiral Sunil Lanba stated that this commissioning marked a milestone in the journey of the Indian Navy towards indigenous submarine building. The Indian Navy is deeply committed to the principle of indigenisation and the Government’s thrust on ‘Make in India’. Commissioning of Kalvari is a testimony of our resolve and these achievements are a result of the Indian Navy’s proactive and integrated approach to achieve self-reliance, the Admiral said.

The Prime Minister said that the entire ecosystem related to defence and security has started to change in the last three years. He said the skill-set accumulated during the manufacture of INS Kalvari is an asset for India. 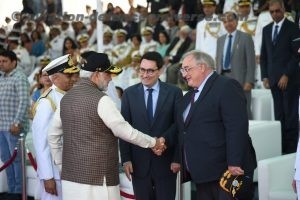 Hervé Guillou, Chairman of Naval Group said,  “Naval Group is proud to have contributed to the commissioning of INS Kalvari, which achieves our vision to strengthen strategic partnership in India. Naval Group has been operating in India for more than decade and along with its partner MDL, is fully committed to the “Make in India” initiative paving way for self-reliance of Indian Navy. We are convinced that such partnerships based on trust and quality is the key to long term success for Indian defence industry and its sovereignty.”

The first of class, INS Kalvari, set afloat on 27 October 2015, had started its sea trial in 2016. She successfully test fired an MBDA SM39 anti-ship missile and torpedo and thus is combat–ready. Khanderi, the second of Kalvari class submarines, was launched in Mumbai on 12 January 2017 and is undergoing several phases of sea trials. All the remaining submarines are in different stages of construction and will be delivered at a rate of at least one every 12 months.

Loïc Piedevache, Country Head- India, MBDA said, “we congratulate the Indian Government and all those involved in the induction of the INS Kalvari into service with the Indian Navy. MBDA is proud that its Exocet SM39 missile has been chosen to provide the Kalvari class of submarines with its advanced anti-ship capabilities thereby reaffirming the Company’s longstanding relationship with India’s Armed Forces”. 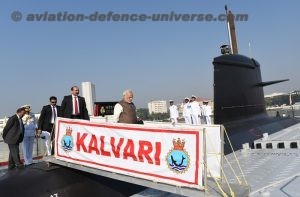