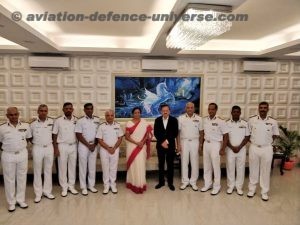 New Delhi. 24 September 2018. Defence Minister Nirmala Sitharaman, while inaugurating the 37th Coast Guard Commanders’ Conference here, lauded the exemplary efficiency of the Indian Coast Guard (ICG) and foresightedness of its leadership for scientific and meticulously planned development of the organisation to meet the emergent challenges.

She added that admirable capabilities and relentless surveillance efforts of ICG in the vast and expansive maritime zones of India are unmatched in the Indo-Pacific region, and regularly the focus of discussion and appreciation in all international forums. 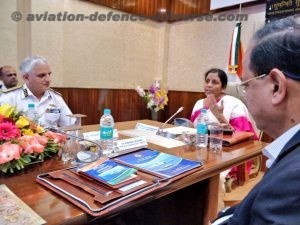 Sitharaman also appreciated the exemplary leadership and stellar role of ICG in protecting the citizens in times of adversity particularly post cyclone Ockhi as well as for the overwhelming response during Kerala floods. The RM called upon top Commanders of ICG to deliberate and discuss ways and means to engage fishing communities to adopt technology driven instruments for further enhancing safety and security at sea.

While complimenting consistent efforts of ICG in filling up the gaps in surveillance through CSN Phase-I, the Minister assured staunch commitment of Ministry of Defence (MoD) for completion of Phase-II in a time bound manner. 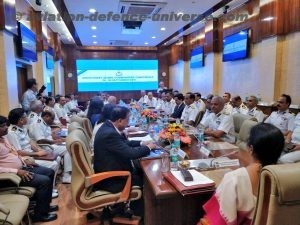 Director General Coast Guard, Director General Rajendra Singh, thanked the RM and the MoD for the unbounded support towards transforming the ICG capacity and capability and reassured that regardless of any challenge, the ICG remains ever diligent in performing its noble duty of saving life and property in distress at sea and protecting the marine environment and leaving no stone unturned in protecting security interests in the maritime zones of India.