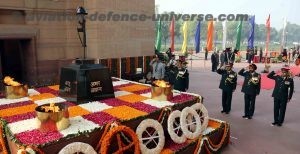 New Delhi. 18 November 2017. Indian Army celebrated the 237 Corps of Engineers Day today. In a solemn Ceremony organised at ‘Amar Jawan Jyoti’, Lt Gen Suresh Sharma, Engineer-in-Chief along with other serving and retired officers & men laid wreaths and paid homage to the brave soldiers who sacrificed their life for the country.

The Corps of Engineers provides combat engineering support, develops infrastructure for armed forces and other defence organisations, and maintains connectivity along our vast borders besides providing succor to populace during natural disasters. These tasks are executed through four pillars of the Corps – Combat Engineers, Military Engineering Service, Border Roads Organisation and Military Survey.

The raising day is celebrated to commemorate raising of first Engineer Company in 1780. The modern day Corps of Engineers has three groups i.e, Madras Sappers, Bengal Sappers and Bombay Sappers which were amalgamated into the Corps on 18 Nov 1932. Since its inception, history is replete with colossal exemplary contributions of the Corps of Engineers both in war and peace.

As part of celebrations, a function was also organised at E-in-C’s Branch, Kashmir House, New Delhi to honour the achievers of the Corps in the fields of technical competence, professional excellence, sports and adventures.