Reflections of a soldier
Battle Ground COVID 19
Home › Spotlight › India-Nepal-China : A sandwich Nepal enjoys being in!

India-Nepal-China : A sandwich Nepal enjoys being in! 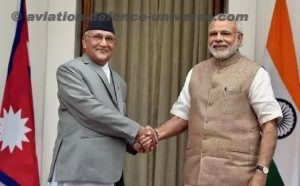 New Delhi. 04 July 2018. When it comes to the Himalayas the trinity of India-Nepal-China seems the most complex and when it comes to geopolitics of the region Nepal looks like the happy tomato in the sandwich . Trying to balance between the two big wigs on its either side, Nepal has a tough path to tread on , but not an impossible one.

Prime Minister of Nepal K.P. Sharma Oli returned from China on recently after completion of a successful five day trip, although he made his first three day official visit to India in April and after Oli’s visit Prime Minister Modi also reciprocated by visiting Nepal.

Oli who is close to China signed a transit trade treaty with Beijing in his last tenure in 2016 just to minimize Nepal’s dependence on India. In the recent visit to China the delegation led by Oli signed 14 agreements however the most important Memorandum of Understanding (MOU) was the construction of Railway network which will connect the Gyirong trading port in Xigaze in Tibet with Kathmandu. The railway line which would pass from strenuous Himalayan region would further reduce Nepalese reliance on India. It is the second important move of Oli to reduce Nepal’s dependence on India and become closer to China. Beside MOU’s on road and rail link, agreements were also inked on energy including hydroelectric projects, cement factories, fruit production, tourism, technical cooperation, human resources development and infrastructure projects including transportation, and water resources projects. An understanding was also developed so that Nepalese can use highways on Tibet which will enhance people to people contact. Nepalese Prime Minister also mentioned that an outline is being prepared for a long-term financial backing to Nepal.

The details of MOU about the railway line which would pass from a very difficult terrain were not disclosed as it would contain several clauses which may not be liked by the people of Nepal. China which is developing infrastructure in neighbouring countries including Sri Lanka, Pakistan and Bangladesh keeps the contents of the agreement secret. The details of much hyped China Pakistan Economic Corridor (CPEC) in which China has pledged to invest more than $50 billion are still not available to public although there is lot of resentment in Gilgit, Baltistan and Balochistan from where CPEC would pass. The analysts mention that under the agreement contracts of all constructions have to be given to Chinese firms which charge more money than other international firms. Chinese firms bring everything from homeland including the workforce. Secondly Chinese firms give loan at much higher rates. Sri Lanka where Chinese constructed outsized infrastructure projects could not repay the loan and ultimately had to surrender Hambantota Port as well as 15000 acres of land adjacent to the port to China on a 99 years lease.

Same way CPEC will prove a debt-trap for Pakistan as the country is passing from an economic crisis and Beijing will not only occupy Gwadar port but will also exploit the mineral resources and virgin land of Giligit & Baltistan.

It appears that Nepal will be the next victim of China and former Foreign Minister Prakash Saran Mahat has correctly pointed out that Nepal will not be in a position to repay the loan as the cost of construction of Railways in this hilly and inhospitable terrain may be more than the annual capital expenditure of the country. He further pointed out that the returns of such gargantuan project will come very late and in the meantime poor Nepalese will continue suffering. The analysts assert that the railway line is not in the interest of Nepal but both China and Oli want to construct the railway line so that the dependence on India can be reduced. The 70-120 KMs railway line which will be a technological marvel will require extensive and problematical tunnels, bridge and culverts.

Oli exploits anti-India sentiments which are high since September 2015 when Nepal alleged that India has created an economic and humanitarian crisis by blocking supply of petroleum, medicines and other important items. India denied these fabricated allegations. India baiters also allege that India wishes to control Nepal and desires to carve out a separate state for people of Indian origin (Madhesis). 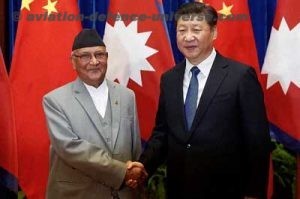 Oli and his party may try to replace India by taking assistance from Beijing but it will be difficult for China to replace India due to geographical reasons. Beijing is an expansionist country and its strategy is to construct jumbo infrastructure projects in financially starved neighbourhood by giving loans at higher rates. After sometime the neighbouring countries are unable to pay the loan and China occupies the strategic ports and areas. China signed Free Trade Agreement and took one island of Maldives and negotiating to take one more island. Beijing also invested huge amount in Bangladesh and in this way besides creating jobs for Chinese and good return of their investment China is also encircling India which is a potential rival.

Oli won 2017 elections on anti-India rhetoric and he wants to show to anti-India and pro-Chinese masses that he is lessening Nepal’s dependence on India. Although the Trans Himalayan railway is not an economically viable project because the trade-volume present and future through this route will be less but it is a secondary issue, Oli will get support from the masses. India also promised a 69 KMs oil pipeline from Motihari (Bihar) to Amlekhaganj in Nepal, construction of railway line from Raxaul (Bihar) to Kathmandu and Arun Three hydropower plant which would be important for energy hungry Nepal.

China also offered a trilateral cooperation in Nepal between India, China and Nepal however India is reluctant to join the trilateral agreement. China is also eager to get India’s support for President Xi Jinping’s dream project Belt and Road Initiative (BRI) which India refused to accept as it passes from Kashmir which is illegally occupied by Pakistan. Secondly Indian policy makers feel that India has a deep-rooted relationship with Nepal hence trilateral relationship will not be beneficial for India.

The policy planners in Nepal must consider that signing of Transit and Trade Treaty with China or constructing of a railway line linking both the countries are good on paper but practically China’s seaports are more than 3000 KMs away hence it is better for Nepal to link more with India than China.

China which gives prime importance to security is averse to the idea of opening more check posts. In fact the oldest and most popular border-post Tatopani is closed from last three years.  However the influence of China is increasing and Chinese tourists have outnumbered Indian tourists in the first quarter of 2018. The cooperation between Nepalese army and Chinese army is also increasing and last year both the armies conducted a joint exercise. Although Chinese President Xi Jinping has not visited Nepal so far but high-level visits between both the countries have considerably increased.

Chinese lobby is quite strong in Nepal and leaders of political parties, intellectuals and media support the implementation of agreements with China and are in favour of reducing dependence on India. The newspapers and magazines print articles and editorials favouring BRI and ask government to start projects related to BRI. The Chinese lobby also project shortcomings in Indian projects especially the delay in completion of the Indian funded projects.

Beijing always claims that it does not interfere in the internal affairs of Nepal while there is a large majority which alleges that India interferes in the internal affairs of Nepal and its approach is of big brother. According to an estimate about 1.5 million Nepalese are working in India but it does not create a goodwill as large number of Nepalese are doing menial jobs and does not have good feeling about country of their employment. Chinese lobby in Nepal claim that it is humiliating for Nepal.

China has deep pockets and surplus foreign exchange. In 2017 Chinese firms promised to invest about $ 8.3 billion while India pledged paltry sum of $317 million only however Modi government which is pursuing “neighbourhood policy” gave full importance to all its neighbours including Nepal. Modi in his recent visit insisted more on cultural and religious ties including the development of “Ramayana Circuit”, places related to Buddha and Jain religions. It may develop religious tourism which will increase people to people contact.

Chinese presence will increase in Nepal and India’s warning that it will be debt-trap is of no use as Nepalese will consider it as interference in their internal affairs. Several agreements with China will die their own death as they are not practicable. China promised to supply petroleum products to Nepal but it could not work and Nepal is importing petroleum products from India only. The railway line between Nepal and Tibet may also meet the same fate while railway line connecting Lumbini to Kathmandu will be complete. Same way Nepal signed in favour of BRI in May 2017 but there is no major headway in it.  Hence India should watch patiently and Nepalese inclination towards China will wither-away in due course of time. The prudent Nepalese realise that Chinese terms and conditions of the contract are unfavourable to Nepal and in long-run it will be detrimental for the country while India is a democratic country and has no expansionist designs hence it is easier to deal with it.