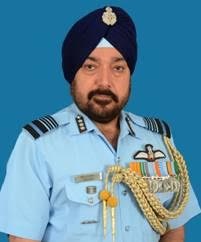 New Delhi. 27 August 2016.Air Mshl HS Arora AVSM has been appointed as Director General Air (Operations).
Commissioned in the IAF as a figher pilot in Dec 1981, he has over 2600 hours of operational flying on MiG 21, MiG 29 and other variants of aircraft in IAF inventory, including helicopters. He has served as Directing Staff at ‘Tactics and Air Combat Development Establishment’ (TACDE) and as a Flying Inspector in the ‘Directorate of Air Staff Inspection’ (DASI). He was deputed as Defence Attache in the Embassy of India, Bankok, Thiland from 2006 to 2009.

He commanded 45 Squadron – ‘The Flying Dagger’ – as a Wing Commander and as a Group Captain he was ADDC Cdr and Station Commander at 33 SU – ‘The Scanners’. As an Air Commodore he commanded Air Force Station Adampur in Punjab and as and Air Vice Marshal he was Air Defence Commander at Headquarters of Western Air Command as well as Easter Air Command.

He is a meritorious graduate of Tactics and Air Combat Development Establishment, Defence Services Staff College and the National Defence College, He is also Master of Philosophy in Defence and Strategic Studies.
In recognition of his meritorious service he was commended by the AOC-in-C, in 1997 and was awarded Ati Vishist Seva Medal on 26 Jan 2011 by the President of India.