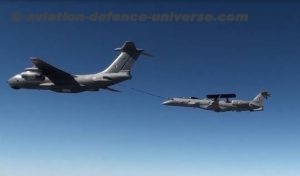 New Delhi. 30 November 2017.  An Indian Air Force Embraer transport aircraft specialised to conduct Airborne Early Warning and Control (AEW&C) function, successfully carried out Air to Air Refuelling (AAR), to fly a long duration flight beyond the aircraft’s stated endurance. It is also the first time that AAR has been carried out on the Embraer  platform.

The “Probe and Drogue” air-to-air refuelling methodology practiced by IAF pilots requires exceptional flying skills as the receiving aircraft has to accurately insert the receptacle probe into the basket shaped drogue trailing behind the fuel tanker aircraft. During the process of Air-to-Air Refuelling both aircraft have to maintain extremely accurate flying parameters. IAF is one of the few Air Forces in the world to demonstrate this capability and the Embraer AEW&C has also proved its prowess in the category. A mere 10 minute in-flight refuelling can generate additional four hours of flying endurance.  The achievement has given a tremendous boost to Indian Air Force’s operational capability.