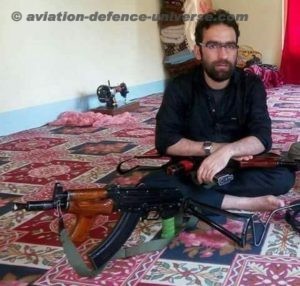 New Delhi. 10 May 2020. It was  news which might be the announcement of the advent of a new era in J&K , when the security forces  exterminated Riyaz Naikoo a top commander of Hizbul Mujahedeen (HM) in a fierce encounter. On the night of 5 May the police received confirmed information that Riyaz Naikoo was hiding in his native village Beighpora, Awantipora hence a cordon and search operation was launched.

The Jawans of 55 Rastriya Rifles, Special Operations Group of J &K police and 185 battalion of Central Reserve Police Force (CRPF) launched the operation at Beighpora. In past Naikoo escaped during the encounters, hence this time security forces took adequate precautions. All entry and exit points of the village were sealed. Mobile internet services were suspended and even calling on Jio network was also blocked so that various social networking groups of Inter Services Intelligence (ISI) and its agents do not work. The gun-battle started from the night of 5 May and continued on 6th May when security forces successfully gunned down Naikoo and his two accomplices.

According to intelligence agencies, ISI has created more than 300 WhatsApp groups and each group has about 300 persons and at the moment security forces surround any terrorist, ISI or their agents send information on all these groups and within no time few thousand stone-pelters gather and hinder the operations. Most of the stone pelters are not innocent children but are paid agents of ISI and separatists. However, this time stone-pelters got the information but after the security forces eliminated the top Hizbul commander. Heavy stone pelting was done at Beighpora, Gulzarpora, Charsoo, Padgampora and nearby areas. The stone-pelters also tried to damage the vehicles of security forces but security forces used minimum of force and used teargas shells to disband the mob.

Naikoo became the commander of banned Hizbul Mujahideen (HM) after the killing of HM commander Burhan Wani who was killed by security forces in an encounter on 8 July  2016. Naikoo who was a mathematics teacher before joining terrorism was A++ category of terrorist and had a prize money of Rs.12 lakh on his head. He was dare-devil and came to limelight when he fired shots from Kalashnikov rifle in the funeral procession of Shariq Ahmad Bhat a HM terrorist who was killed by security forces in encounter at Naina village in Pulwama District on 20 January 2016. Shariq Ahmad was resident of Brow Bandana village in Awantipora district. Arms and ammunition including one AK 47 rifle was recovered from the site of encounter. His two accomplices escaped from the encounter place. Naikoo by firing in the funeral of a slain terrorist revived the old tradition of firing at the funeral of the killed terrorist.

Riyaz Naikoo, released a video and sent it to different media houses for the circulation. The video was a publicity stunt prepared by HM at the instructions of ISI. It justifies the armed struggle by diverse terrorist outfits in the valley. The video alleges that Kashmir is under illegal occupation of Indian forces and they are perpetrating atrocities on Kashmiri masses. The video also mentions that Kashmiri Pandits have full right to live in Kashmir. He also claimed that Burhan Wani was a mass leader and he was not a terrorist. Anything to justify their militant activities.

The difficulties of Imran government has considerably heightened because of spread of coronavirus. The health sector is totally neglected in Pakistan and it is expected that the death toll will be substantially enhanced. Hence ISI is trying to increase terrorist activities in Kashmir to detract public attention from their day to day difficulties. In last one month about 22 security personnel including a decorated colonel and a major were martyred in the valley. Although about 76 terrorists were killed in this year, but security forces were under pressure to eliminate some top commander. The security forces prepared the list of top commanders of Hizbul Mujahideen, Lashkar-e-Toiba, Jaish-e-Mohamed and Al-Badr. The name of Riyaz Naikoo was at the top of the list.

Riyaz Naikoo was tech savvy and deeply involved in misguiding and  recruiting Kashmiri youths. He entered the world of terrorism in 2012 and since then was involved in several terrorist activities including attack on security forces. After Zakir Rashid Bhat also known as Zakir Musa left HM and constituted Ansar Ghazwat-ul-Hind which was an Al- Qaeda cell in India, Riyaz Naikoo became the top commander of HM.

ISI created several terrorist organisations in the valley are carrying out terrorist activities. The important outfits include Hizb-ul-Mujahideen which means an organisation of holy warriors. HM was constituted in 1989 and it is considered as the military wing of Jamaat-e-Islami (JI). The Headquarters of JI is in Muzaffarabad in POK and it converted the Kashmir conflict from national issue to a religious issue and now HM activists are fighting Jihad in Kashmir.

The other ISI supported terrorist outfit active in Kashmir is Jaish-e-Mohammed (J-e-M) which was founded in 2000. J-e-M is Pakistan based terrorist organisation which is fighting to merge whole Kashmir in Pakistan. It has close relationship with Afghan Taliban and Al-Qaeda in Afghanistan.

Lashkar-e-Toiba (L-e-T) is the biggest and most powerful terrorist outfit in South Asia. L-e-T was founded in 1987 by Hafiz Saeed and Al Qaeda Chief Osama bin Laden was the main financier of the outfit. Although officially it is banned in Pakistan, but it is openly operative in the country and collecting funds, running several terrorist camps and infiltrating terrorists in India. The outfit gets full support from ISI and Pakistan army officers serving and retired train the terrorists in L-e-T camps. Al-Badr was constituted in June 1998 on behest of ISI which separated it from Hizb-ul-Mujahideen. Its headquarter is at Mansehra, Pakistan and it operates in J&K and involved in several terrorist activities.

The government is handling Kashmir problem under a long-term strategy. A presidential decree was issued on 5 August and Article 370 was defanged, Article 35A became redundant and the state was split into two union territories. Government has also changed the policy and now terrorists who are killed but not identified their bodies are not handed over to their families. Now Centre has asked the TV channels that weather forecast should include POK and Gilgit and Baltistan areas. TV channels will show all these areas as part of India and it will serve a blunt message to Imran government that now India is active, assertive and aggressive in Kashmir. Now India makes it clear that Pakistan is in illegal possession of over 86,000 square KMs area in J&K.

Security forces had also launched Operation All Out (OAO) . The basic object of the operation is to flush out terrorists from J&K and under the operation all security forces including Army, Central Reserve Police Force, Border Security Force, Jammu and Kashmir Police, Intelligence Bureau and Research & Analysis Wing will work together. The operation is giving desired results and number of terrorists both local and foreign have dwindled very fast. The security forces are also eliminating terrorists under operation cordon and search. The government is moving in right direction and will get the desired results. The public of J&K is also realising the futility of terrorism and wants peace in the state.  Pakistan’s deep state instead of assisting terrorist outfits should devote time and resources in the progress of the country.