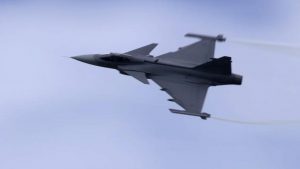 Farnborough, UK.  12 July 2016. Saab, the Swedish Air Force and Sweden’s Defence Materiel Administration have now certified, approved and accepted into service the latest operational upgrade and combat enhancement for the Gripen fighter, which includes the integration of  METEOR missile.

The complete MS20 upgrade is now flying with Swedish Air Force Gripens and MS20 enhancements will soon be implemented in the Gripens of the Czech Air Force. The upgrade delivers a host of new capability options for air-to-air, air-to-surface and ISTAR missions plus many improved mission systems and other changes. As ever with Gripen, operators are free to choose how, when and to what extent they implement the new capabilities that the upgrade enables.

A key element of Gripen’s MS20 capability expansion is full integration of the MBDA Meteor BVRAAM (Beyond Visual Range Air-to-Air Missile). Swedish Air Force Gripens are thus the world’s first and only fighters to be operational with this revolutionary European weapon system. The ramjet-powered Meteor, developed by MBDA with Saab as a key partner, is an advanced, long-range and agile air-to-air weapon that is uniquely designed to counter the most sophisticated airborne threats of the 21st century.

Meteor is a tactical missile with strategic effect. Its extremely long range (beyond 100 km) and unrivalled no escape zone (three times greater than any current BVR missile) will dominate the future air-to-air battlespace, giving a decisive capability to Gripen and its pilots.

Saab CEO Håkan Buskhe added, “Saab greatly appreciates our good relationship with MBDA both as a partner for Meteor development and production, and through our close cooperation on the Meteor integration programme for Gripen. This partnership has been the foundation for the delivery and deployment of a superior missile product. Gripen played a major role in the Meteor development project, and we are very proud to have Gripen as the first fighter to take Meteor into service.”

In the air-to-ground role MS20 delivers further significant enhancements. This includes integration of the Boeing GBU-39 Small Diameter Bomb (SDB) for a high-precision, long-range strike capability. A smart launcher can carry four SDBs, with a maximum of 16 on a single Gripen. 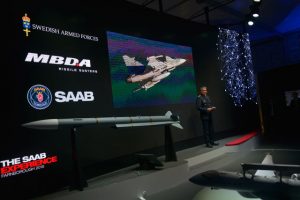 Among other MS20 pilot-centred enhancements are a new ground collision and avoidance system (GCAS) to protect the aircraft in demanding low-altitude environments, and an improved CBRN system that allows Gripen to stay operational and effective in the event of a chemical, biological, radiological or nuclear attack.

Gripen is developed with the long-term future in mind. It is designed for continuous upgrades to take on and defeat new combat challenges – a design approach that has already been proven many times. The implementation of MS20 opens a further chapter in this story, making significant new capabilities available to future users and the current Gripen family alike.