Farnborough, UK. 20 July 2022. As a key component in its multifaceted exhibit for the Farnborough International Airshow (FIA2022) this July, automation specialist FANUC UK will host THREE of the company’s key technology partners and system integrators. Each company will stage live on-stand demonstrations of their systems for aerospace engineering, uniting FANUC capabilities with their own application expertise.

Loop Technology will run a critical section of its FibreFORM system, integrating the FANUC R 2000iC/210F robot. The technology automates the process of overlaying composite plies, whether for carbon fibre or another material. Complex profiles can be followed to build up large-size parts such as sections of aircraft fuselage. By combining multiple modules, aircraft sections up to 20m long can be laid up.

“The system is capable of translating CAD data into an accurate surface profile, with a repeat accuracy to within +/-1mm,” explains Adam White, Loop Technology. “Orientation can be fully horizontal, vertical or anywhere in between. In some cases, even an inverted orientation may be possible.”

Loop’s FibreFORM system requires significantly less energy and space than the more established automated fibre placement (AFP) technologies that are used in composite manufacturing. It can also halve the cost of manufacture, when compared with this type of AFP system with lower deposition rates.

Living up to its name, Midlands-based smart technology startup True Position Robotics (TPR) will demonstrate a system which integrates FANUC’s high-accuracy M-800iA/60 robot to perform automated drilling and inspection. The six-axis robot has a reach of 2,040mm and a load capacity of 60kg. 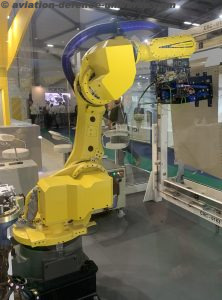 TPR’s Roger Holden says: “In the aerospace industry, expectations of accuracy have continued to rise over the years and a robot like the M 800iA/60 can offer that level of precision without needing to compromise on production speeds.”

TPR is keen to provide the aerospace equivalent of the type of robotic spot-welding and riveting systems seen in automotive plants. It has been helped along this path by a programme supported by the Aerospace Technology Institute and Innovate UK. FANUC UK’s contribution has included supporting TPR in developing a larger diameter drilling capability.

The inspection component comes courtesy of an optical tracker. TPR worked to develop its own system to allow the robot, metrology system and analysis software to interface with each other.

The third example of a working cell from a systems integrator will be Flexlase laser processing from Cyan Tec. Here, the technology contributed by FANUC consists of the M20iB/25 robot and 30i-B controller. The compact and modular system utilises a range of fibre-fed, solid-state lasers. According to CyanTec, this improves not only the quality of welding and cutting but also the speed at which operations are performed. 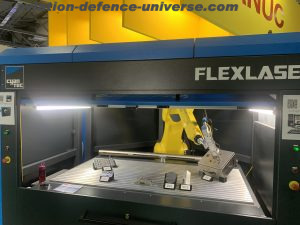 The modular design means that customers can specify a tailored system to meet their own processing needs, including those specific to aerospace applications. Machine functions are accessed via an easy-to-use touchscreen while a firmly mounted slide system allows the worktable to move in and out of the cell for easy loading and unloading of parts.

These exciting partnerships showcasing the integration of FANUC technology provide just a sample of the wealth of applications and innovations featured in the FANUC Aerospace Portal, an online resource that is free to use – and which is seeing its European launch at FIA2022. Once registered, users can search the Portal by manufacturing task, company or component, and find well-documented case studies of how the various technologies have been applied in real-world situations.

“Given the sheer scale of the industry, even seasoned veterans may not be aware just how far automation and robotics have advanced in terms of meeting engineering requirements in a particular area,” says Bob Struijk, Vice President European Business Development &amp; Managing Director, FANUC Israel. “At the same time, our Aerospace Portal documents the proven track record of each technology and application, providing a vital combination of inspiration and reassurance through customer case studies and end-user success stories.”